George Was A Gentle Giant

A chapter in the book Felix and other Friends 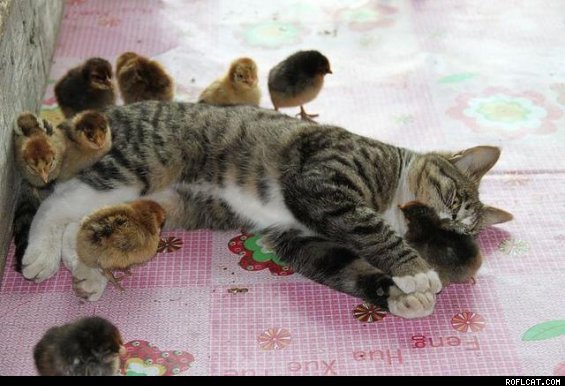 1944 winter in the Adelaide Hills. We moved to a house set in an apple orchard.

There was plenty of wood for the kitchen fire, the bath heater and the fire in the sitting room at night to keep us warm, and a big, rose coloured kerosene lamp to see by when it grew dark

They arranged a peppercorn rent with the orchardist who owned the house and shortly after we moved in, my mother was delivered of her sixth child, a son.

I was three and a half years old and, until my brother was born, the youngest.
I grew up liking my own company, but it wasn't long before I became aware of the other "tenants" in the house.
They were a family of cats. One was George, a huge, ginger tom.

With the softest heart of all of them.

.I burst into tears knowing how hungry he would have been, but he went unfed that night and many another.

One day we were all invited to the land lord's house for the afternoon, so my father prepared the box of chickens he had by fixing a kerosene heated incubator light over the small, golden, cheeping birds to keep them warm while we were away.
The weather turned wild and wet, and we learned that the bridge we had crossed earlier that day was now under water so we would have to return another way.

It grew late and my father started to worry about the kerosene in the heater. Would it last out or would the chickens perish in the cold.?

My two elder brothers were sent to go over the next creek crossing and get home to see to the chickens before it was too late.

They set off in the pouring rain, barefooted with a piece if canvas over them to keep dry.

Then my mother said she was sure she had seen a flash as the big oil lamp was lit .
Sure enough, there was a soft glow in the kitchen window and not long after smoke ascended from the chimney.

When we finally reached home the boys met my father at the door with huge grins on their faces.
Without a word they led him to the large box where the chickens were.

They were all fast asleep, warm and snug, cuddled into George the big ginger cat.

He lay there like a living hot water bottle, drowsy and relaxed while the tiny chickens burrowed into his furry flank and chirruped themselves back to sleep.

My father didn't say much, but after that, George was fed away from the others and cats have been a part of my life ever since.


Through the eyes of a child writing prompt entry

This is a true story. My father was badly injured during WW11 and came home a different man from the one who went away. The chickens were the start of an idea he had to grow purebred chickens and sell them at market. He did quite well out of the first lot, but suffered an attack of some chicken illness with subsequent
batches. He ended up going in for market gardening, but gave it up when his rivals announced hey were buying several blocks of land and building a house on the biggest one . Dad turned to the bottle and never left it.
Pays one point and 2 member cents.