A prince meets his future bride. 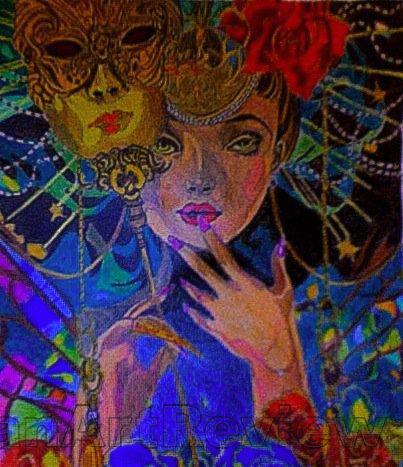 She was ecstatic, in her hands was the invitation dreamed about for forever. She was going to a ball. Her parents, particularly her mother, encouraged her to apply, but to simply take fate for what it was. Nothing else mattered.

Her first concern was, of course, her dress and an appropriate mask. After all it was a masquerade ball. A theme was needed, but what? An idea came to her, simple but elegant.
Running to her mother, to share first the invitation and then the idea, she smiled.

Mother was excited, "Oh my goodness gracious, to know that my daughter has been invited to the ball of balls is simply beyond belief. I am so proud of you and your idea is fantastic. No one will ever guess who you are. What ever made you think of it, my dear?"

"Well, first of all, I knew we could not afford a new gown, so I would have to make do with whatever we had available. The thought of your green one just seemed to pop in my head. I could dress it up with artificial ivy and leaves, maybe a little sparkle here and there. It would be perfect. And the mask would be simple to make, using green and brown material, a touch of ivy and a few twigs would do nicely. It could be a full head mask to hide my auburn hair. No one would guess and absolutely no one would know. What do you think, Mother?"

"Let's get started, first we will steam the gown, then take it in where it needs to be. Your father will be so surprised. Where did you get such a creative mind?"

The next few days involved a several activities. They were limited on time, only two weeks. Even if they could afford to have a dress and mask made, it would cost a fortune and not be unique. The dress was perfect with the alterations and the ivy and leaves. The mask, unfortunately, proved to be more of a challenge. It was finally decided that it needed to cover her hair, which they could pin up, part of her shoulders and her eyes and nose. To do so, meant that they would simply use the idea of a tree trunk with tufts of leaves and twigs. As things escalated, they added a bird's nest to the top. Three days before the ball, they were done.

The whole idea behind the masquerade ball was to introduce the prince to his future bride. The king and queen thought it a novel idea. The prince had no one in particular in mind and thus was very receptive to the plan.

His parents, being who they were, planned to be just themselves but insisted that their son dress up. He was their only child and they definitely tried to make his life interesting. Even they had no clue of his intended identity.

The night of the ball found the castle ablaze with candles and tiny lights. The guests were introduced as the character they portrayed, so when she was identified it was as 'a forest nymph', to which she smiled. To her amazement, everyone else was dressed to become either a fairy tale character or someone famous but no one was dressed like she was.

She strolled around, taking it all in. Heavens, there was even a couple dressed as the king and queen. Their mask was simple, just gold material covering their upper faces with just enough opening for eyes.

She wandered closer to compliment them on their choices, but instead saw a young man dressed as a male fairy. His mask like hers covered all of his head, with pointed ears and a two string of braided blonde hair. He was a perfect replicate of a fairy.

She was so glad that someone else had at least attempted to be creative, she was even impressed. Within a couple of minutes, he stood in front of her, she offered her hand and was pleased when he bowed over it and kissed her gloved fingers. She felt impelled to curtsy slightly.

He calmly introduced himself as the fairy and she did like wise as the forest nymph.
He then surprised her, by asking her to dance and she accepted. She was at a ball and dancing was an enjoyment to her. Four dances later, she was astonished at his lightness and his directions.

They were right in front of the fake king and queen, when suddenly the queen screamed, and the king began to fall. He fell several steps down the stairs as his queen ran after him. He had been stabbed in the back. Fortunately, the dagger missed any vital organs, but there was a lot of blood.

The fairy threw off his mask, to reveal that he was truly the dark haired Prince Ivan, as he knelt by his father's side.

As he did so, he yelled to her, "Don't go anywhere. Please, just remain there."

Just then, the criminal, who had crept up behind her grabbed at the back of her mask. His intent was to use her as a hostage, especially since the prince had directed her to remain in position.

Fortunately for her, all he held was the mask as she ducked and became free. He was readily apprehended by guards.
Gasps from the crowd as the final pins fell away allowing her auburn hair to flow to her waist. Several people muttered 'Amy', followed by silence.

The king stirred and awoke, grimacing as he did so. "I am alright, son. It is but a nik even though, I am assuming, a lot of blood. My dearest, help me up and offer me your arm."
The king stood, with his queen at his side. His son stood on his other side, prepared to catch him if he were to stumble.

"People, I apologize for the disruption. I am pleased that my son has found his future queen, his bride. I and the queen bless the fact that he is happy. Now, please continue the ball and excuse us."

Prince Ivan raced quickly to Amy's side, grabbed her hand and tugged her to follow her new in-laws, the King and Queen.

It was truly a night.


Thank you for the artwork- Masquerade by Raoul D'Harmental
Pays one point and 2 member cents.


© Copyright 2022. aryr All rights reserved.
aryr has granted FanStory.com, its affiliates and its syndicates non-exclusive rights to display this work.