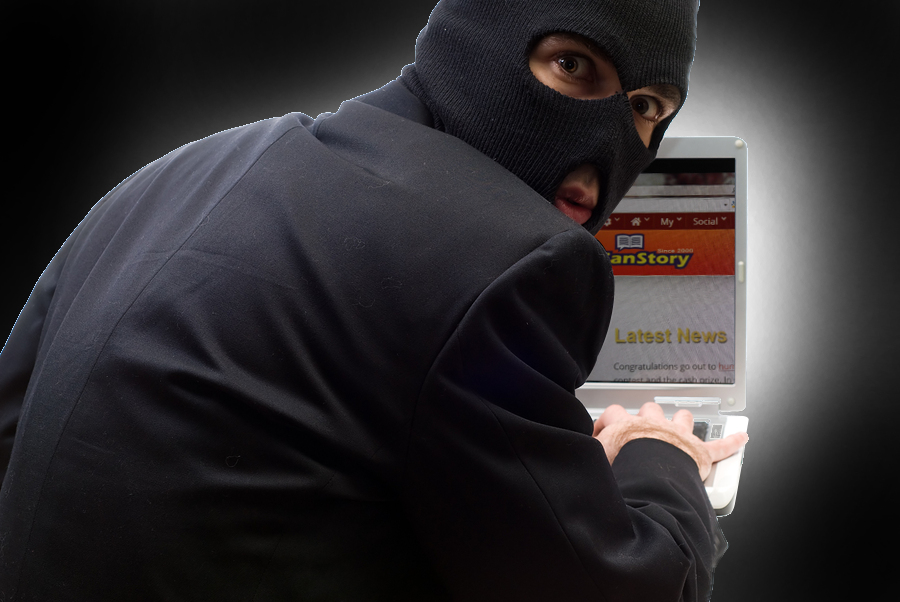 A little more than a year ago, I learned that my neighbor across
the street was a member of Fanstory as well. It turns out he's an
excellent story writer and wins almost every contest he joins. He
repeatedly mocks me with it. Numerous times through the year,
I'd be outside doing something in the yard and he would go out
of his way to yell across the street, "Contest winner," knowing I
was in the prompt too.

I knew he'd be joining this contest, so I wanted to write something
killer that would finally beat what he wrote. I thought all day about
it but drew a blank and couldn't come up with anything worthwhile.
So, I made the only logical choice. I was going to wait until he fell
asleep and break into his house and steal what he wrote instead.

At three in the morning, dressed in all black with gloves and a ski
mask, I snuck across the street. I knew his computer was in his
upstairs study, which was just down the hall from his bedroom.

I jumped his fence and went around to the back door, then used
my lock pick kit to gain entry. The house was dark so I was fairly
certain he was asleep. I crept up the stairs to the second floor
and tiptoed down the hall to his study. I wiggled the mouse and
his computer screen came to life. There it was, what I came for...
his story for this contest.

Instantly the lights came on. I managed to dive out of the way
just as the baseball bat came crashing down on the desk. I kicked
James into the bookcase. He came back at me for another swing.
I grabbed a crystal lamp off the desk and flung it at his head and
it burst into a million pieces. I leapt forward and tried grabbing the
ball bat from his hands. He kicked me in the shin then brutally
head-butted me. I fell backward out of the study door onto the
banister. He lunged at me for another massive blow with the ball
bat. I fell to the side as the banister wood splintered into pieces.
This time I kicked him right in the groin and he dropped the bat,
but that didn't stop him. He charged and tackled me like a linebacker
and we both viciously crashed down the stairs. At the bottom, I
jumped up before him and as he started getting up, I yanked his
display case of numerous writing awards over on top of him. After
that, he wasn't fighting anymore. He was out cold.

I ran back up the stairs to get what I had come for. From my pocket,
I pulled out a flash drive and copied his contest entry. I had to step
over his mangled body as I left, and then came back home.

I popped the flash drive into my computer and brought up what
he had written. After reading it, I said, "Well, this is a huge load
of crap. Contest winner, my ass."

So then I simply just entered this instead.