A final drink before you go... 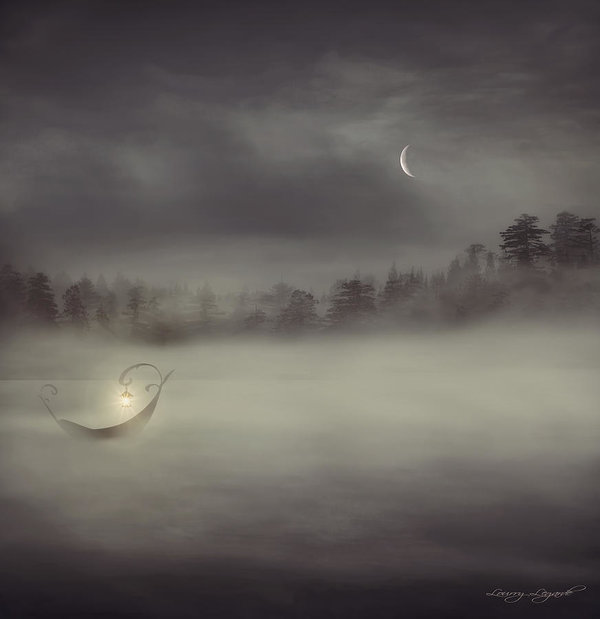 Charles tripped over the curb. The night was enveloped in fog, the sounds of a large river echoing nearby. Hearing what sounded like glasses clinking, he pushed forward.

He was having trouble remembering anything about the night. Yeah, he remembered the crowds – the music, dancing, and Brandy… Yes, Brandy!

Gotta get her number!

Laughing at his lascivious thoughts, he stumbled again and caught himself against a wall. Gosh, his legs felt like they were made of lead! Leaning against it, he breathed heavily.

Another memory, this one of feeling panicked – music mixed with…screaming? Perhaps a ‘bang’ or ‘pop’? Something really loud…

He grabbed the hem of his shirt and wiped his tongue with it, wrinkling his nose at the strong metallic taste there. The wiping didn’t help, but it did yield a coin that, when it fell, rang eerily through the silence.

Charles crawled around to find it. He had no other currency – couldn’t even find his phone – so he needed that coin! He stood slowly, again cursing the fact that he had no pockets. Soft music and a glow ahead urged him forward. If only he could see a street sign…

Shrugging, he walked inside and immediately relaxed. Did he recognize anything? No, not really, but it was definitely better than that looming blackness outside.

The tavern had a few tables and a small bar along the back. There was one other patron: an extra-large guy in old work clothes was tossing back the last of a beer.

Now, that I could use.

Charles looked at the lone coin in his hand and sighed.

No harm in trying.

He sidled up to the bar, placing the coin there. The diminutive bartender, who looked older than Methuselah, set a pint of stout in front of him.

He pushed the coin toward the old man, but it wasn’t the bartender who spoke.

“Drink up, Charles. I’ve a schedule to keep!”  The behemoth of a man stood, reached across, and took the coin.

The man’s laughter shook the whole tavern. Charles downed a swallow for courage.

“No, boy” – he strode to the door, retrieved his large cloak and ferryman pole, and turned – “it’s mine” – his hideous face lit with amusement as he donned his cape – “for your river passage.”

Just then, Brandy stumbled through the doorway. Their eyes met, and the memory of the gunshots and pain ripped through Charles…

Charles noticed the bartender was busy fixing some frou-frou girly drink for Brandy.

Guess I won’t be needing her number now.

Charon’s chilling laughter reverberated around them. Resigned, Charles chugged the rest of his beer.

The Greek God, Charon (Kharon), is the ferryman of Hades. Those who passed away would have to cross the river Styx to reach the Underworld (Hades' realm), and Charon would take them on this journey. His fee for carrying the dead across to the Underworld was a single coin. This coin was placed in the mouth of the deceased prior to burial. Once their fare had been paid, Charon would carry the soul across the river. There they would face judgment before Hades for how they would spend the afterlife, either in Elysium and the Elysian Fields or in the depths of Tartarus.

In Greek art, Charon is depicted as wearing a conical hat and tunic. However, that quickly evolved into a cloak and hood similar to the image of the fabled Grim Reaper. He typically stands in his boat holding a pole. While often portrayed as an old, bearded man with a crooked nose and repulsive face, Charon was quite strong and wielded the pole of his ferry like a weapon, ensuring that those who had not paid his fee did not make it aboard.

[Note: In most Greek literary sources, the river of the underworld is referred to as Acheron. Roman poets and other literary sources call the river Styx, the one with which many are most familiar. Charon is associated with both rivers and serves them as ferryman, regardless of the name.]
Information summarized from greekgodsandgoddesses.net


Many of my fans are aware of my 'modern romance' with the Greco-Roman Pantheons... this was another fun venture there! Thank you for reading me! ;)