They're never quite what we remember... are they? 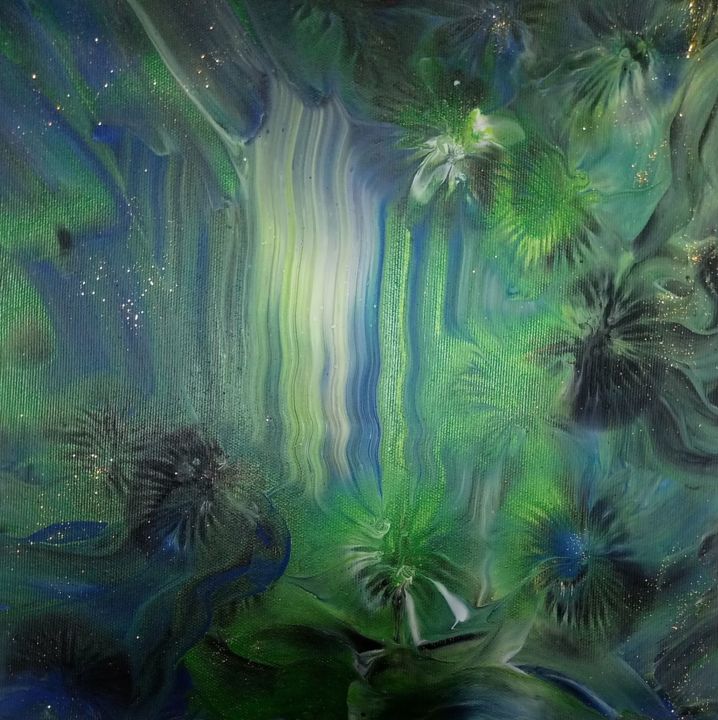 Faye flipped on the light and looked skeptically at her two charges for the evening. They were both standing at the window when they were supposed to be in bed. After a second or two, she added to her gaze by raising an eyebrow. In response to the silent accusation, Jerrod appeared to duck his head until Gerald nudged him.

“Jarrod?” Might as well go to the weakest link first, Faye mused mentally to herself as she began her interrogation. “What kind of noise was it?”

Having run her own full-time babysitting business, Miss Faye and Friends, for many, many years now, she had gotten to know her ‘regulars’ quite well.

“Ummmm…” Jarrod’s feet commanded his attention at that moment, but he managed to whisper, “Gerry said it was that big giant-thing again.”

Gerald got that defiant look in his eye as he often did. A wonderful independent streak to be sure, and Faye knew it just needed to be nurtured properly. Not that the twins’ father helped with that – sigh. However, she supposed Nathanial did the best he could since the boys’ mother had left him when they were but two.

“But it was a sneeze this time, Miss Faye, I just know it!” Gerald’s little seven-year-old jaw tightened, hands fisted with his obvious frustration. The boy was so like his father at this age. “Jarrod! Tell her what you told me.”

He punched poor Jarrod in the arm. Jarrod turned to retaliate, but Faye snapped her fingers. Loudly. Very loudly. Faye’s snaps were legendary among her charges as well as many of their parents before them.

“Sorry,” he mumbled as he continued trying to soothe the hurt. Jarrod just glared at him. “But please tell her, Jarrod.”

Faye relaxed her gaze and sighed.

Jarrod stared at his brother for just a bit longer and then turned a completely humble and almost timid face to Faye.

“Ummmm…it sounded like…” Jarrod frowned really hard for a few seconds, his gaze once again falling to the floor with his thoughts. “Like…like it was like…”

Suddenly, Jarrod’s face lit up, and he stepped over to the desk. With an excited look on his face, Jarrod grabbed a tissue from its box, brought the tissue up to his nose, and blew really hard.

“Yeah!” Gerald exclaimed and pointed. “It sounded just like that except there was this loud ‘ooaarr!’ before it!”

Both Gerald and Jarrod stood there and looked at her so very expectantly that she had to bite the inside of her mouth to keep a straight face. Goodness, they were quite the handful this evening. Again, flashes of Nathanial went through her mind and she smiled…inwardly, of course.

“Oar?” Faye asked. “Why on Earth would someone say ‘oar’ before they blow their nose?”

Gerald looked incredulous as Jarrod stifled a laugh. Gerald raised his fist to punch him in the arm again, but Faye raised a finger, lowered her chin, and narrowed her eyes at the more exercised of the twins.

“He didn’t really say ‘oar’, Miss Faye,” Gerald tried to explain as he lowered his hand without touching his brother. He grabbed that hand with his other hand as if to leash the insolent limb. “It was more of a roar but without the ‘r’ in the beginning.”

Faye tilted her head in feigned confusion at the youth’s description.

Gerald sighed but soldiered on.

“You know it wasn’t like a monster ROOOAARRR!” He reared back and thumped his chest with both arms.

Jarrod looked at him, horrified, and took a step away. Faye bit harder on the inside of her poor cheek. Not noticing Faye’s enjoyment or even his brother’s aversion, Gerald continued.

“It was just a plain OOOAARR!” Gerald raised both palms in a mock surrender pose, curling his fingers forward like claws – his face alight with consternation complete with furrowed brow. Then he lowered his hands and pointed to Jarrod’s nose. “And that was followed by the nose-blowy sound.”

Faye looked to Jarrod for confirmation and raised her eyebrow again in silent question. His gaze found his feet again.

"And di-” Faye began, but Jarrod turned his face up toward her and continued.

“But with maybe a bit less RRRR” – Jarrod wrinkled his face in a ‘growly’ look – “and more OOO.” He squinted his eyes and made the ‘o’ shape with his lips as he spoke the last.

Faye nodded. They were both so precious; she wanted to kiss them both. Yes, they were certainly Nathanial’s sons. But, being the professional that she was, Faye continued her inquisition with the necessary air of authority.

“And did either of you see this giant-thing that made the sneezing ‘oar’ sound?”

The light in their little faces dimmed somewhat. Jarrod looked down again and Gerald raised that chin in challenge.

“No, but it was the same rustling we heard last week outside the window,” he paused, looking for some sort of acknowledgement in Faye’s face. Then he turned toward his brother. “Right, Jarrod? It was just like last week, huh?”

Faye smiled as Jarrod nodded just in the slightest. “You mean the noise that we went outside to investigate and found nothing except your cat’s footprints in the mud?”

Both boys’ faces looked at her as they pleaded in unison.

“But, Miss Faye, there’s no way this was Freckles!”

Jarrod stopped there, nudging his brother to continue which he did, valiantly.

“And a cat doesn’t make an OOAAR sound and we –”

Faye relaxed and started the process of shooing the boys back to bed.  She’d heard enough.

“Have you ever heard a Maine Coon cat cough up a hairball, my young gents? I’m sure Freckles makes a god-awful sound when he’s hacking up one. Probably quite a bit of ‘sneezy-sounding oars’, I would venture.” She picked up Gerald and tossed him on the top bunk and held open the covers on the bottom bunk so Jerrod could climb in.

“Don’t you worry yourselves.” She kissed Jarrod’s forehead and stood. “I’ll go make sure Freckles is okay.” She pulled Gerald’s little face down toward her and kissed his forehead, too.

As both boys rubbed their foreheads in earnest, Faye watched their eyes begin to get heavy-lidded. Smiling inwardly and maybe just a bit outwardly, she walked to the window, closed the blind, and drew the curtain. Turning back again, she reached for the doorknob to let herself out.

“You boys get some sleep now, okay?”

Two small sighs of irritation followed the request as she flipped off the light. She waited for their response, and, when none came, she turned and prompted again.

A small sigh was the response. She flipped the light back on to see Gerald physically fighting sleep by rubbing his eyes.

“Yes, ma’am,” Gerald mumbled in concesssion as he turned his back to her in demonstration of his frustration. Now, whether that frustration was with her dismissal of his concerns or because he suddenly could not stay awake, she couldn't be sure.

But it didn't matter.

Faye blew a kiss toward the bunk beds as she turned out the light. The trail of sparkling dust made its way along her breath to their resting heads.

She didn’t need to wait for their response before shutting the door gently.

Shaking her head in slight frustration, she made a beeline for the door to the backyard – the yard across which the boys’ bedroom window looked.

Stepping outside, she didn’t have to look far. There, just under the boys’ window, sat gentle Drustan. The huge troll’s legs were drawn up in front of him, and, on his lap, he cradled Freckles, Jarrod and Gerald’s full-grown Maine Coon.

Most eyes would simply see the cat, but Faye – the name an Americanized adaptation of her true nature, Fairy – saw one of her most trusted employees, Dru: runny nose and all. Faye simply sighed and shook her head.

Faye closed the distance between them. As she did so, she reached into the air and pulled a large cloth from the elements. Tiny sprinkles of fairy dust fell from its intricate hem as it materialized.

Dru raised his large, pleading eyes to her. The big troll sniffed a loud, wet snort and smiled.

“I know, but Freckles needed me, you know? He says the neighbor’s cat was a bully.”

Faye laughed and nodded, wondering what other kind of cat could possibly 'bully' the boys' Freckles. She looked at the cat accusingly, but the cat simply groomed a large paw in disinterest.

“Okay, I think he’s recovered now.” She reached up and wiped Dru’s nose and handed the kerchief to him. As Dru accepted it, Faye lifted the cat off his lap so that he could stand.

“Now, you’re supposed to be watching the perimeter, remember?”

Dru straightened, but before Faye could muffle the noise, he sneezed again.

He looked crestfallen, but Faye smiled in reassurance.

“It’s okay. I gave the boys a bit of a 'bump' to sleep.” She winked and the huge troll visibly relaxed, his sweet smile returning. “But you need to use the kerchief to keep it quiet, alright?”

Dru nodded as he blew his nose into the magic kerchief; not a sound could be heard. Faye placed the cat on the ground. Immediately, it found Dru’s large leg around which to wrap and rub itself.

“Don’t worry,” Dru sounded as though he were talking from inside a large fish bowl due to his allergies, “Freckles and I will make sure everything’s safe out here, Miss Faye.”

Still sniffling, he reached down and petted the cat, his over-sized hand dwarfing the feline’s frame to the point of comical. He stood and wiped his nose again as the two of them turned the corner of the house.

Faye chuffed and, still smiling, went back inside. She tiptoed upstairs to check on the twins; they were sound asleep.

Downstairs once again, she was sure to pull the curtains before allowing her wings to fully unfurl. She just needed to relax for a few moments.

Pulling out her phone, she gave Camulus and Coran a quick call while she went through some stretching exercises. The Brownies were tasked with babysitting for their most persnickety customer tonight, and she liked to keep a close handle on things.

Just as she had done for over a century now.

Oh, can you imagine the stories Miss Faye could tell? ;) Thank you for reading me! ;)


Image of 'Once upon a time' by Vanja Zanze (Croatian artist) at www.artmajeur.com