Renewed revelation of sense of self and purpose...

The Wind Is But The Messenger 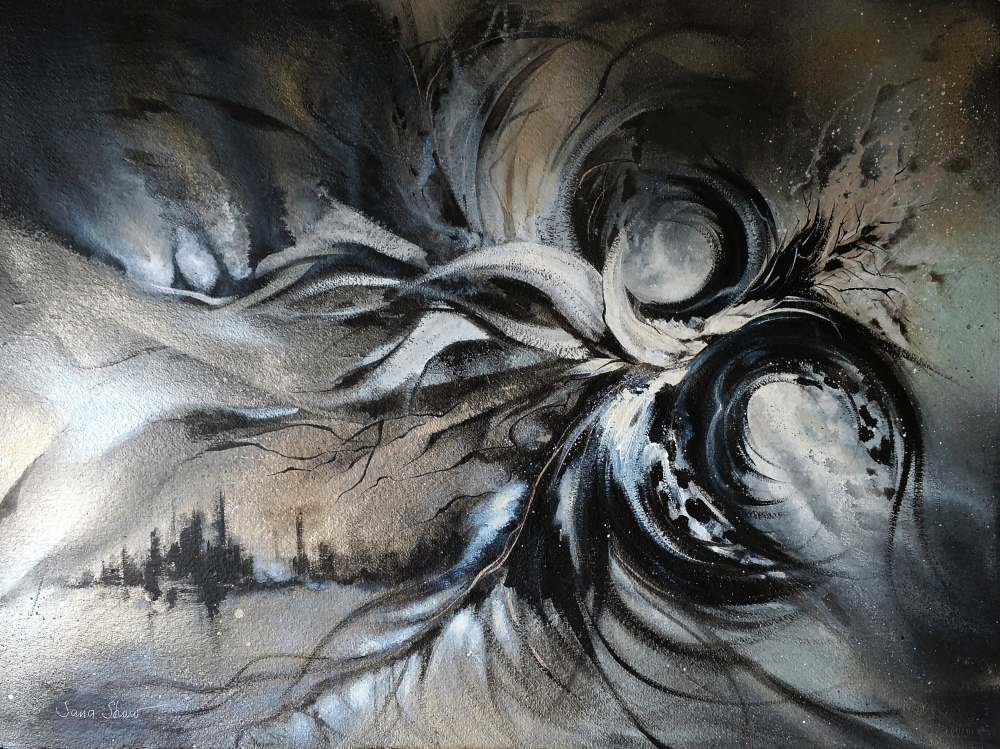 The beach was a complete disaster as were the foothills that led me to it. It looked like some giant monster had lifted an entire house and shaken it until all of it was strewn along this entire stretch of sand. Upward, into the hills, the debris trail continued on until the view disappeared over the final rise. There, where the land met the sky, the heavens were blue – as blue as the ocean had been early this morning.

Now, the ocean looked drab, foreboding – even her swells seemed unsettled as the churning gray clouds receded from view, leaving a white shroud in memory of the masterpiece that used to be.

Stepping carefully over some of the larger pieces of wood and metal, I paused periodically and threw a few starfish back into the seaweed-laden waters. Perhaps they would live, perhaps they would not. The better question was: why had I?

I remembered Father’s arms around me as the winds had built…remembered his whispered words of reassurance… that I would be alright. That the wind was but a messenger.

A large sea turtle lay on its back flailing its flippers in vain – there was no swimming in the air for it. I approached with caution, whispering words of calm to perhaps settle its struggles. It spied my approach and seemed to panic, its thrashing transitioning from measured to frenetic as its head and neck joined the madness.

Reaching out to touch its shell, I watched it completely still at the contact. An odd, gurgling bark escaped its mouth, startling it as much as me. Something akin to laughter escaped my mouth at its comical expression – the lilt of my laughter sounding foreign even wrong to my own ears.

Suffering was not a subject of humor.

Although the creature didn’t seem to try to move further, I pushed it on the sand down toward the water, hoping that it could right itself once buoyed by the waves. I was afraid my rolling it over would break a flipper on the hard, wet sand. When we reached the water, the large beast didn’t move at all. Its flippers just hung down, their tips nearly reaching the shallow water rushing around it.

Bending down, I looked into its now-lifeless eyes, the depth of nothingness I beheld niggling at something inside of me. I reached out and touched the skin that had just moments before been taut with a struggle for survival, but it felt unreal, otherworldly. Touching my own skin, I could feel the sensations not only on the skin itself, but more on my fingertips that passed over the flawless ebony there.

I stood and stared at the large, still-beautiful-in-death creature. Taking in the slight movements induced by the actions of the waves, I breathed deeply, trying to make sense of the death. The loss of life…

And the still, quiet peacefulness that followed.

I looked up and, once again, took in the destruction that littered the landscape. I felt a small sigh escape my lips and a hint of warmth creep into my limbs. There, just a short distance up the beach, I thought I saw movement from a mound of objects. As I marched determined to reach it, I heard Father’s voice whisper across my memory again.

“…feel it for you are one with it. In your touch, my beloved, is healing…”

I didn’t even look for Father. Instinctively, I knew he wasn’t here. Not yet.

I reached the area where I thought I had detected movement – the mound, it seemed, was bodies. As a larger part of the scene came into focus, I noticed more bodies. Mostly men, it seemed, though there were some women as well – all of them were in uniform of some type.

A shipwreck. This debris must be from a ship of some kind that had broken up in the storm.

The body at my feet groaned, bones sticking out of its skin in multiple locations. I bent my knees and reached out to turn the large man toward me. My long, golden hair brushed his body as it rolled.

A shudder ran through him from where my hand touched him, and his eyes narrowed as he attempted to see me through his obvious pain. He drew a singular ragged breath as a smile pushed against his bloody, sand-coated cheeks, and I watched the life drain from his eyes into oblivion.

Standing quickly and stepping back from the body, my hands began to tingle as they hung by my side, the warmth deep inside them feeding the experience. Raising my palms to examine them briefly, I became aware of the wind beginning to build again. There were only hints of it at first since the silence had prevailed here for so long. But, somehow, I knew it was returning: there was another storm on the way.

I could feel it. Just as I could feel my time here beginning to run short. But what exactly did that mean? Short, why?

A gurgle taunted my ears over the breezes, and I turned my attention to the source. There, up near what used to be the tree line, two contorted bodies were sprawled beside a pool of water. One was but half a person, its legs having been severed somehow, but the position of the other – although complete in body – was nowhere near normal. The face lay gasping on the water’s edge, the neck obviously unable to move. Misshapen and mangled hands clawed at the sand as the sailor fought to live.

Crouching beside her, I gently turned her face toward mine. Part of her skull was visible where the skin and hair had been ripped away; yet, when her searching eye found my face, her gurgles became lost in a gasp as all of her remaining breath culminated in the slurred words, “Thank you.” And before the second word was complete – my arms tingling and the warmth within me increasing – I watched shadows chase away what vestiges of life remained in her eye.

Nodding as if in acknowledgement to her words, I released her inanimate face and glanced at the reflection of my bright, ice-blue eyes dancing and staring back at me from the pool’s surface. Although my image rippled with the ever-increasing winds, I stilled and simply stared at my own image for a few moments. My mind was mesmerized by the contrast of inky midnight to blinding sunlight my skin and hair created, how my eyes had an illumination of their own that pulsed with the tingling sensations now racing throughout my body.

Touching my own cheek and then reaching toward the pool where I had just observed my own simple action, my eyes and my hand were drawn to point above my head’s reflection where the ripples interacted near the water’s edge. There, towering above my head, they shown in all their magnificent and powerful glory…

Wings. My wings. And, as the full reality of my presence here came crashing upon me, their obsidian sheen in the changing skylight ruffled a renewed sense of purpose in me.

This was who I was. Why I had lived through this storm. Why I would always live.

I am the storm.

Father’s words rang clearly now. The ones he always hid from me until these first contacts…

“…the storms of destruction you must carry are part of their brokenness, Chaos. But they and their plight should always be understood through the eyes of innocence…such is the burden you must bear as part of your mission.”

I breathed in the building winds here as I remembered Father's arms releasing me, visions of the previous maelstrom that had been spawned because of who I was ebbing through my being.

I saw the ship. I saw the waves and the winds and the rain. I heard the crash of the impact with the reef. I heard the screams and the suction of the water as it tore the ship to pieces. I felt their prayers and cries for help.

I was Chaos and my being hummed and warmed with that knowledge – a knowledge born of millennia of service to Father.

“Do what you must and heal them home.”

They were His final words before this destruction. Before my last storm.

The words that now drove my actions to relieve each of the still-suffering lives on this beach of the burdens of this world.

Now, the smell of the rising ozone-laced gusts of my next storm invigorated my senses and renewed my feet to find each waning soul that remained on this beach and grant them passage…. Just as I had caused this destruction, so I would lead my harvest home.

“You are found then?”

Father’s strong yet loving voice broke through the growing turbulence surrounding me. In fact, a bubble of calm followed his approach as I touched the last of the dying, delivering them over.

“I am, Father,” I said, bowing in supplication.

His hand touched my chin – the only hand that could touch me and live – and raised my face to meet his gaze.

His smile was always enough.

Then, I felt the walls of calm his presence had provided fall away as my surrounding storm built, my hair whipping in the tumultuous air and ocean spray. I watched his hand pull away and the vision of the devastation around me begin to fade – the further his hand withdrew, the more cloudy my comprehension of anything but the blanket of the storm with me at its heart.

There was nothing but the storm… a black and violent wind that began where my wings ended, the whole of tumult surrounding and comforting my being...

Open lots that once held houses hissed with leaking natural gas lines. All around, what remained of the houses’ foundations was littered with debris as were the streets that had led to them. It looked as though some giant monster had stepped through the larger walls that still stood and shaken other parts of them and strewn the pieces along the cluttered streets. Upward, into the hills, the tornado’s path of destruction continued on until the view disappeared over the final rise. There, just outside the valley where the land met the sky, the heavens were blue – as blue as the sunrise had been early this morning.

Stepping carefully around some of the larger pieces of concrete and metal, I paused to dig a small dog out of the rubble. It ran off, howling in obvious pain. Perhaps it would live, perhaps it would not. The better question was: why had I?

I remembered Father’s arms around me as the winds had built…remembered his whispered words of reassurance… that I would be alright. That the wind was but a messenger…

And I am the message.