At The Beach Story contest entry 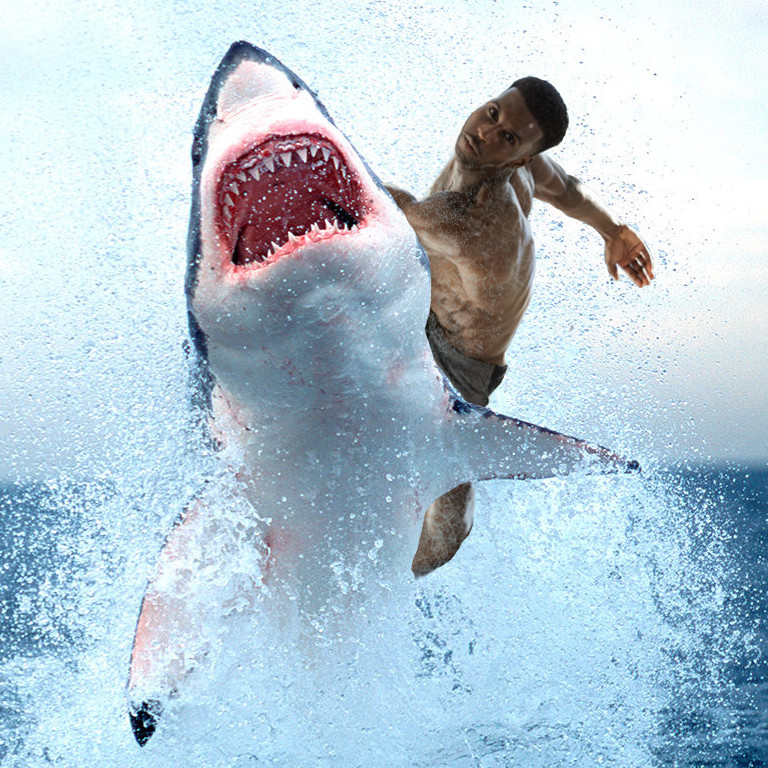 On the 4th of July, I took my family to St. Petersburg Beach
for a fun day of sunshine and sand castles. I had a cold brew
in my coolie, an umbrella to shade me from sun's heat and my
slick Ray-Ban sunglasses on. My baby lay soakin' in the rays,
lookin' fine as hell. My two youngest kids were burying each
other in the sand. My oldest was out in the water with her
boyfriend, because he just had to come along or she would
simply die without him and surely make my whole existence
and vacation one big miserable failure if I didn't.

Three sips into my tasty Corona, I was feeling like their TV
commercial. Oh yeah, relaxed. The only thing missing was
two palm trees and the hammock I'd be lying in.

That's when someone yelled, "SHARK!"

I spotted my girl and her dip-shit boyfriend way the hell out there.
"Great." The first thing I thought of was, "Damn, now my beer's
gonna get warm."

I jumped up and ran for the water as they swam for shore, just like
the thirty eight thousand, nine hundred and fourteen other people.
Yes, the beach was slightly crowded that day.

That's when I spotted the fin, it was true; a shark. I dove into the waves
and swam with everything I had to get to my daughter. It could have eaten
her boyfriend and I probably wouldn't have cared too much but she was
further out than him.

The shark and I were racing to get to my daughter first. I splashed out
of the water as high as I could right while passing her and came down with
an elbow, like a pro wrestler, blasting its snout atop the gaping mouth full
of teeth. This thing had to be ten foot long. This wasn't going to be easy.

It instantly twisted, chomping for another attempt. I jerked back to avoid
my head from becoming the appetizer. Earlier that day, we stopped at the
dollar store, where everything costs a buck, for some last minute swimming
stuff. One thing I bought was a cheapie necklace that had a little charm of
Florida on it. Well, when its jaws snapped in front of my face, it latched onto
this dollar store necklace, breaking it from around my neck. "Oh, hell no." I
was getting that necklace back.

Like Mike Tyson, I uppercut its massive jaw and that's when it turned to flee.
As it spun, I grabbed onto its dorsal fin and hung on. It was like the scene from
a bull riding rodeo movie, but I wasn't letting go. I was determined to, some way,
some how, get that dollar store necklace back.

After five miles of thrashing in and out of the ocean waves, the helicopter spotted
me and the Coast Guard finally caught up. I reach around the side of its head
and slid my fingers in the corner of its mouth. I tugged to the side and started
steering the shark like a horse. We headed straight for the ship.

The guard on the front deck had his M-16 aimed right at the shark's head. We
were coming from the side. Seconds before impact, it propelled out of the water.
The guard only got off one round before the shark chomped off the top quarter
of his torso and splashed back into the water on the other side. I still hung
on though. I pulled its mouth again and steered it back toward the ship.

I yelled, "Throw me a gun!" This time there were two crew members waiting. They
devised a plan. I guess they saw the movie Jaws because it was just about like that.
One held up a diver air tank and the other had a handgun ready for me. Again we
propelled out of the water. The man with the air tank fell backward while throwing
the tank in the air. The other threw the gun with great accuracy. The shark gobbled
the tank down and I caught the gun perfectly in my hand as we dove over.

With one hand still holding the fin, I jumped up on its back, riding it like a surfboard.
Once we were far enough from the boat, I jumped straight up, using both hands to
aim, and fired numerous rounds into the back of the shark, aiming for its belly.

One bullet caught the air tank and blew the shark into a giant explosion of sushi.

The Coast Guard came and picked me up. While I was being pulled in, one asked,
"Are you all right?"

Right there in the water floated that Florida dollar store necklace. I grabbed it on
the way up and said, "I am now."


At the Beach contest entry


I created this silly picture from a couple different Google Images.
Pays one point and 2 member cents.