Why Not Short Stories contest entry 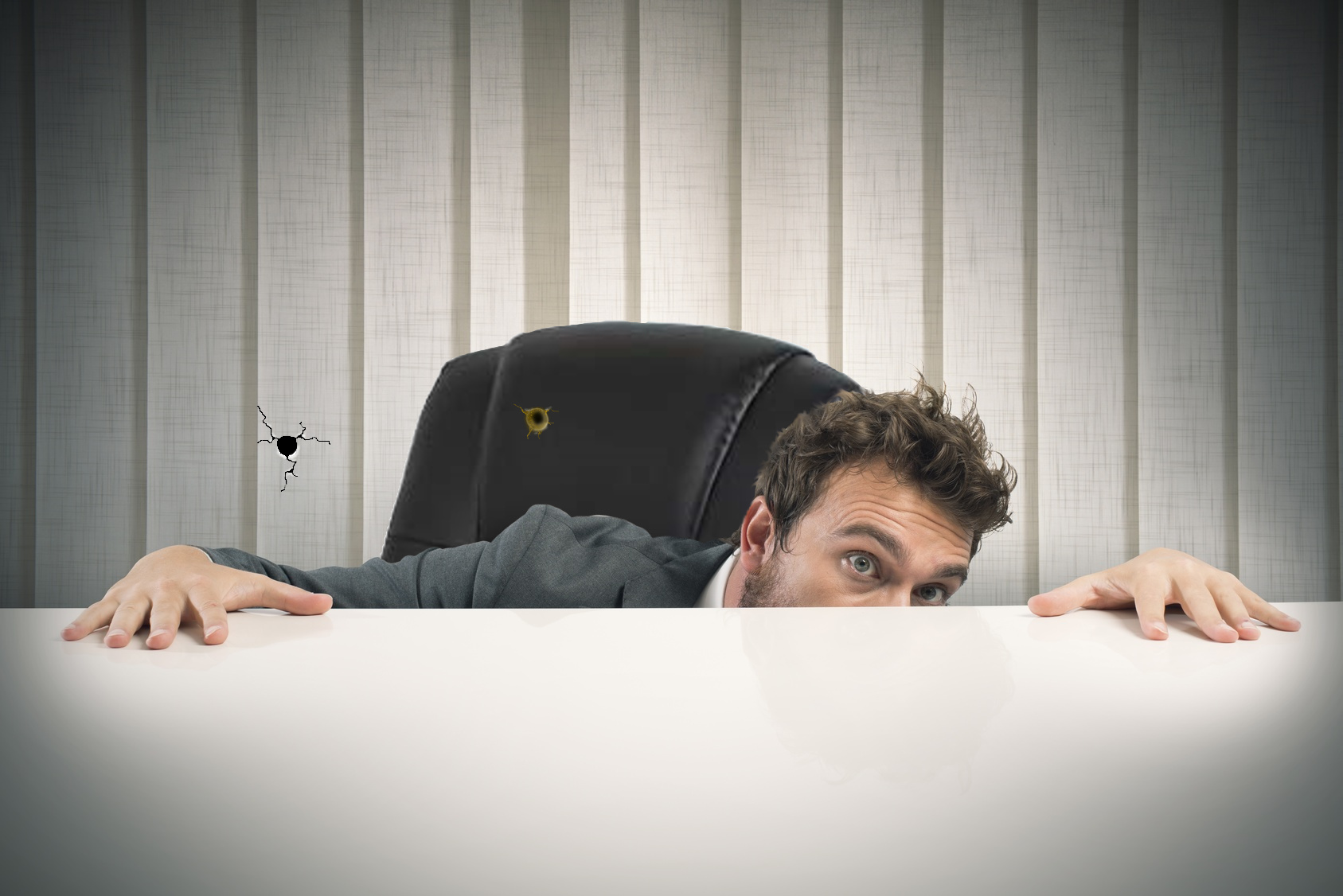 It was crucial that I get this information in the right hands. I finished typing and retrieved
the composition from my printer. I went back to my desk and sat down but dropped the
envelope I was going to put it in. As I bent over to pick it up, I heard my apartment window
crack. The bullet tore through my chair and into the wall behind me. That instant, I realized I
should have kept this to myself and not have told anyone of my intentions. Someone clearly
knew how profitable what I had written was and they were more than willing to have me
murdered for it.

Crouched behind the desk, I crammed the paper in the envelope and shoved it in my front
pocket. I dove behind the couch for cover and the next round shattered the remaining window
into splintered shards. I jumped up and darted out my apartment door.

I looked over the banister, down the stairwell, and saw two men dressed in suits looking back
up at me. When they reached in their jackets and both drew guns, I knew they were here for me.
I obviously couldn't go back in my own apartment. The place across from me was empty so I
kicked in the door and went inside. The ladder to the fire escape outside was missing. I was
trapped.

I leaned against the wall, behind the door, and waited. I had no choice but to fight if I was
going to live. The door slowly started opening with a .45 leading the way. With his arm half
way through, I grabbed the weapon, yanking it toward me, kicking the door at the same time.
His arm snapped in half at the elbow. Just as he shrieked in pain, I yanked the door open and
shot him in the head with his own weapon. Before the second one could react from the blood
splattering all over his face, I kicked him in the chest. Falling over the railing, he screamed as
he fell the three stories to an abrupt first floor landing. I grabbed his gun, as well, when passing
his mangled torso.

Once outside, I clicked the remote to start my car. The explosion incinerated everything within
a thirty foot radius. These people weren't messing around.

The smoke must have blocked his view because the sniper missed me for a third time. Not by
much though. My contact was thirteen blocks away and I couldn't let anything keep me from
reaching him. A bicyclist stopped and unmounted to gawk at the devastation. I kicked him in
the groin and yelled, "Sorry," as I rode off on his Schwinn.

Three blocks later, a Cadillac Escalade came barreling up behind me, smashing any vehicle in
its path. I turned on East Kennedy and, there, saw a second Escalade heading right toward me.

Twenty feet before being run over, I yanked the bike up on a parked Ferrari hood and when I
propelled off the windshield, shot four rounds into the Escalade's driver side window.

It veered to the side and ricocheted off a telephone pole, flying thirty feet in the air before
crashing down on top of the other Escalade that was chasing me. What luck.

That luck quickly ran out when, at the next intersection, a third Cadillac came screeching
around the corner behind me. I dodged and weaved through rush hour traffic. The Caddi
wasn't slowing its pace, driving on the wrong side of the road, forcing oncoming traffic to
either move or be crushed.

One block from my destination, they were only a few car lengths behind me. I plowed through
the light at Lois and at the same time a fuel tanker was coming from the other direction. I
steered the bicycle straight at his right front bumper, forcing him to the left to miss me. Just
as it passed the Cadillac, I shot numerous rounds into it. This explosion made my car explosion
look like a baby fart. There was no doubt my assailants were dead.

While racing up the steps of the building I needed to enter, an assault helicopter whirled
around from the rear. I dove behind a pillar as its machine guns ripped holes in the concrete
around me. With my cover quickly disintegrating, I checked what I had left for ammo. One
single round. That was it...one. I had to make it count.

I knew shortly the gun barrels would overheat and would have to pause to cool down before
firing again. I was right. The moment they stopped, I turned and aimed at the power
transformer above the hovering Apache. It blew and cracked loose an electrical line that
dropped into the blades, snagging and hurling it into the adjacent Wellington skyscraper
with my third giant explosion of the day.

I came upon the door of Jason Madison's office and turned the knob. I was brutally kicked inside
from behind. On the floor, I looked up and there was a ruthless, scar faced, man glaring down at
me. "No one's ever evaded my accuracy...and surely not three times." The sniper. "Trust me, this
is where you die, and painfully, I might add. Give me that envelope and I'll kill you somewhat
swiftly. Or don't...and I'll pry it from your lifeless hands."

I said, "Okay, okay, you win...here." I stood up and waved the envelope out in his direction.
When he reached for it, I grabbed his wrist and yanked him toward me. I fell backward and
use momentum to throw him over me. I jumped up and kicked him in the head like it was
a football. When his torso flew up, I grabbed his neck from behind with my whole right arm,
twisted my body against the flow and crack, his neck rudely snapped.

I let go and he flopped dead in front of the desk. I bent down and picked up the envelope, took
a deep breath and tossed it on the desktop.

Jason, my publicist, asked in a shaking voice, "What is this?"

I answered with a pragmatic tone, "It's just a short story."


Why Not Short Stories? contest entry

I used a couple different Google images pictures and an art program to create this picture. Thank you for reading.