It starts with the basics: a kitchen and a family... 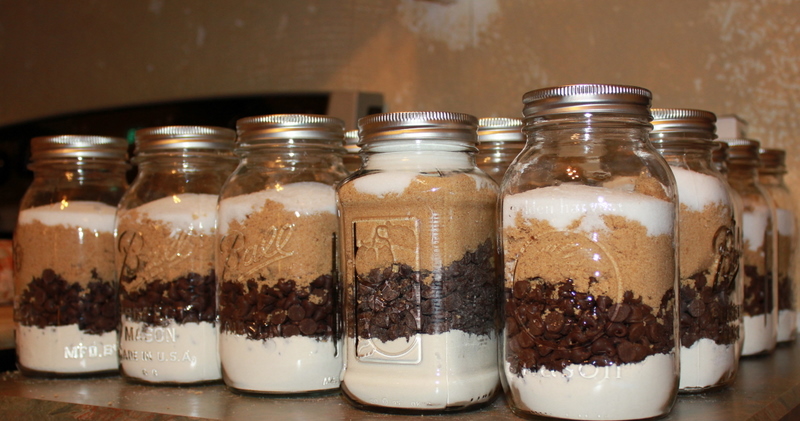 Theresa and Davis bought their first house in suburbia the week before Thanksgiving. Being new to town and far from their families for the first time, they fully expected to spend the holiday by themselves. They were surprised to find they were overwhelmed with invitations to not just Thanksgiving meals, but for many following.

Being from a small town, Theresa was thrilled to meet so many people in such a short span of time. She was so excited, that she decided to make everyone in their neighborhood the special cookie mix jar that her mom made for family and friends back home. It would be her way to share her family’s special cookie recipe with everyone and not have to bake so much!

Once she had all the ingredients neatly layered in the many jars, she made recipe cards on the computer that included the exact amount of wet ingredients to add to the dry to make a batch of a couple dozen of her mom’s wonderful, best ever chocolate chip cookies.

That Saturday afternoon, she and Davis went door-to-door delivering the jars to all of their neighbors.

The next Tuesday afternoon, Mrs. Douglas flagged her down on her way home and invited her over for some cookies with her grandchildren. When she arrived, she was greeted at the door by five curious faces, none of which could have been older than five.

They all ran ahead of her to the kitchen, shouting, “Terry’s here!” and “Can we eat them now, Grand?”

“This was such a wonderful idea,” said Mrs. Douglas as she handed ‘Terry’ one. She accepted and immediately took a bite.

As Terry chewed, she couldn’t help but frown – there was no peppermint in her mom’s cookies! She looked at the cookie and then at Mrs. Douglas.

Mrs. Douglas just chuckled as she passed out a big cookie to each outstretched little hand.

“I added crushed peppermint since the little angels visiting from Canada like that.”

Theresa’s frown deepened, and she was about to object when one of those ‘little angels’ squealed in delight. Looking at all of their little faces, some of which already wore chocolate chip markings, she couldn’t help but smile back – they were so happy they really did look like little angels!

Over the next couple of weeks, Davis and Terry (seems that what folks wanted to call her, and she was fine with that) attended a good many neighborhood Christmas parties, nearly all of which had made her cookie mix with just a little something different. Heck the Khourys had even added figs with some cumin! And, at every party, everyone just smiled and enjoyed the company and sweet treats, whatever they were.

On their way home from the most recent party, Terry was finishing off one of the toasted coconut-chocolate chip cookies from the Williamson’s. Davis reached over and took her hand.

“What’s got you smilin’ so big tonight, sweetie?”

Theresa squeezed his hand and leaned over to kiss him. She reached up with her other hand and wiped off the cookie crumbs on his cheek her kiss had put there.

“Nothing, I suppose." She smiled contentedly. "I just think this is gonna be the perfect neighborhood to start a family.”

Davis stopped and turned toward her, brow furrowed.

Theresa had to chuckle, but her happiness could not be masked.

“Actually? Yes.” She popped the last bit of cookie in her mouth and licked her fingers. “Because of cookies.”

And the moral of the story is:  Every family has a different recipe for happiness, and they all start with the same basic ingredient: love!