The family traditions and legacies lives on... 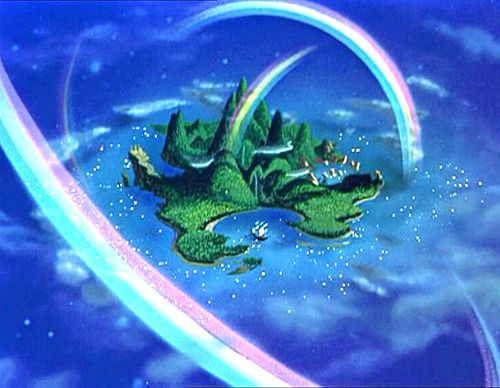 “There was a knock on the door.”

Michael narrowed his eyes at his son's claim, his 'dad focus' pinballing from Wendall's young face to the door behind him and back again. Wendall stood before him, looking like the cat that ate the canary, but, for the life of him, Michael couldn’t figure out what his son was hiding.

“What do you mean ‘a knock’, Wendall?” Michael stepped around him and proceeded to unlock the deadbolt. “I have been working there in the study most of the night, and I didn’t hear a sound.”

Michael opened the door, stepped forward, and pushed the screen door to glance up and down the front porch.

Wendall surreptitiously raised his innocent glance to see the large puddles leading up their front steps right to the doorstop at his dad’s feet. He also noticed the porch light mysteriously glowing brightly again after weeks of neglect by his parents to put a bulb in it – seems there was still no bulb there. Wendall suppressed a giggle - he knew what shone in that light.

Luckily, his dad didn’t seem to notice the water or the fact that there was light where there shouldn’t be. He closed the door carefully, eyeing Wendall suspiciously throughout the entire action.

“You see?” His dad crossed his arms over his chest in that condescending manner he seemed to use with all of his children, “Nothing at all.”

Wendall just shrugged nonchalantly as he tried to contain his sly grin.

“Yeah,” Wendall nodded and turned to walk back up the stairs, “guess it could have been my mu-”

Michael grabbed Wendall’s upper arm – not painfully so, but enough that it jerked his eleven-year-old body and attention back toward his dad.

“Just a moment, young man,” Michael raised himself back to full, towering height - his son’s focus now decidely on him, “I did not dismiss you.”

Wendall stood, solemnly at attention, fighting a nearly losing battle to keep his feet still. He lowered his eyes just like he’d learned to do when his dad got all high-and-mighty like this. Counting the threads in his socks helped.

“Yes, Daddy,” he tried hard to sound thoroughly contrite, even though his smile kept threatening to expose him, “can I go back upsta-”

His dad leaned down, finger under Wendall’s chin, and raised his son’s face until their gazes met.

“May I go back upstairs?” Michael arched one of his big, bushy eyebrows in question, looking for his son’s compliance.

“Yes, Daddy.” It was a herculean effort on Wendall’s part to control his eye roll, but years of practice paid off. “may I go back up upstairs?”

A small sigh of relief escaped his body as his dad removed his finger and re-straightened his stance, eyes gentling ever so slightly.

“Straight to bed, Wendall, do you understand?”

Wendall could tell his dad’s focus was already being drawn back to the office, to that all-powerful computer and its hold on him. Still, he nodded in agreement.

His dad slowly turned toward the study but stopped to re-check the locks on the door. He paused, just standing there, facing the door, before taking a deep breath and shaking his head slightly.

Wendall waited as patiently as an eleven-year-old boy could. Knowing his dad was most likely testing him, he dared not turn toward the stairs. Not yet.

Finally, after what seemed like a small eternity, Michael glanced over his shoulder at his son.

The words were barely out of his mouth before he bolted up the stairs. Michael heard the bedroom door slam in the upstairs hallway.

Michael looked through the peep hole and tried the porch light switch beside the door – up and down a number of times – to no avail. With no light, it was too dark to see out – not that he expected to see anything out there anyway. The knocks on the front door or any entrance late in the night had stopped for him a long time ago. He glanced up the stairs a final time before retiring to the financial report that was due to his investors at tomorrow morning’s meeting.

Wendall had barely secured the door to the bedroom, when there was an insistent knocking on the window. He dashed across the room, unlocking and opening it as quickly as he could.

Almost instantly, Petra flew into the room – her short, bright pink bodice and matching archer’s hat in sharp contrast to her magenta leggings and purple shoes. She swooped around Wendall to alight on his desktop. She stood there, looking down at him, hands on hips with a bit of an annoyed smirk on her face – her little upturned nose as prominent as ever between those emerald green eyes. She even patted her foot as she narrowed her gaze at Wendall, glancing at the miniature sundial on her wristband.

“Midnight, Wen,” she hopped down and motioned out the window as she spoke, “we said we’d meet on the front lawn at midnight.”

Three tiny fairies, pixies to be exact, whizzed in the window and around the room – each taking time to pull Wendall’s hair or poke him in some way. He swatted them away playfully, laughing at their antics and musical voices.

Wendall reached out and lightly tugged Petra’s belt with her knife sheath attached to it.

“I like the purple belt and shoes combo, Petra,” he stepped back indicating the shoes and then her head, “they match the accents you put in your hair last month.”

Petra seemed to lose a bit of her bravado at his words, but it quickly returned when his attention turned to the open window. Wendall leaned on the sill and waved out.

There, a young man wearing next to nothing - his skin a mixture of skin and scales – sat astride a rather sizeable floating sea horse. He held his horse’s reins in one hand and the reins of two additional floating sea horses in the other. They all glowed with the pixies' magic dust.

“I would just like to voice my protest about this second-story window nonsense,” his laughing eyes and jovial attitude betrayed any harshness that may have been in his words, “Grampa James would be ready to hook somebody good if he found out I was out of water this long, especially since someone's father answered the door and I had to hide the horses!”

Petra stuck her head out the window beside Wendall’s.

“Yeah? Well, Uncle Peter told me to stay home tonight, too, you know - yet here we are!”

“Good to see you, too, Nemo,” Wendall laughed as he ducked his head back inside, “you both are so brave to go so far out of your way to pick me up tonight!” He play-punched Petra in the arm. “Let me grab my shoes.”

A quick trip to the closet and he was back at Petra’s side, promptly plopping down on the floor to tie his shoes. It was then that he noticed his permanent markers rising off his desk and coloring mustaches and skulls and cross-bone tattoos on his posters of Selena Gomez and Victoria Justice.

Petra pretended not to notice.

“Really guys?” Wendall shook his head and looked up at Petra as he finished his second shoe. “Can’t you make them stop?”

The markers effectively stopped and hung vertically in space, hovering there with the motions of the pixies that held them. Petra motioned solely with her head toward the desk indicating that the mischievous and, perhaps, jealous fairies were to return the markers to their box thereon.

A chiming chorus of melodious sounds that had a somewhat aggressive tone echoed around the room as the markers took on the role of missiles and were launched across the room, bouncing off the wall against which the desk was positioned.

Wendall jumped to his feet, shaking his head dismissively at their little tantrum.

He held his arms away from his body as the three pixies dove and danced around him in the air – chiding him for something. He began to rise off the ground as he was coated with the pixie dust that the triplet fairies - Winken, Blinken, and Nod - sprinkled on him.

Once out onto the rooftop, Petra and Wendall hopped on the horses that Nemo offered and together they ‘rode’ through the atmosphere up into the moonlight. There were adventures to be had in Neverland this night!

Dr. Michael Darling, Jr. pulled back the blinds in his study just in time to see the three figures silhouetted against the full moon in the sky, the tiny sparkles of the three sprites zipping randomly around them. He huffed and couldn’t help but smile.

“Journey well, Wen, for your ticket to Neverland is fading,” he turned back and sat down, rested his hands on the keyboard, and sighed, “And you can never go back once it’s gone.”

He had a report to complete. He'd be working all night...and straight on 'til morning.

Thank you for reading these 'two generations removed' vision of the Darling, Pan, and Hook legacies. Hopefully, everyone caught the references, but just in case you've forgotten your Original Peter Pan details from 1904, here you go:

Peter Pan is...well, he's Peter Pan!
Captain James Hook is, of course, Captain Hook
Wendy, John, and Michael Darling were the children who traveled to Neverland with Peter
......
I'll let you look up all the rest!

Thank you for reading! Hope you enjoyed...


Image of 'Neverland' from The Disney Wiki [disney.wikia.com/wiki/Neverland]