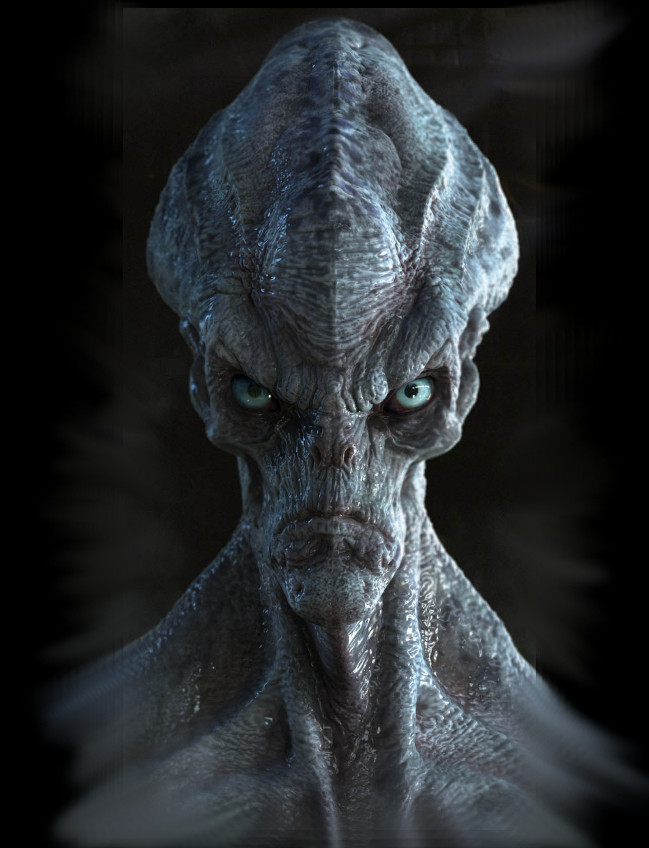 I remember it, heck, I'll never forget it, the day me and ma
wife saved the world, thurty some year ago. She was in town
pickin' up groceries fer the next few weeks, and I was tractorin'
the hay field.

Well, I was headed for the house fer some refreshin' ice tea
when there, in our front yard, was one of them there UFO's.
It was this shiny disk shaped thingamabob, perched up on
three legs. It weren't real big, about eight foot round. It had
steps comin' from the bottom, but I didn't see no weird alien
creatures yet. I figured I'd leave the thing alone and hope it
just went on its merry way. That weren't the case though.

I tried tipy toein' to ma front door. I was still cravin' me some
delicious ice tea, UFO or not. Just before I opened the door,
these two eight foot tall, ugly as the dickens, creatures
instantly appeared behind me. Naked as J-birds but didn't
have 'em a danglin' willie. Oddly enough, I thought to myself,
"Poor fellers."

I was lost for words and, I'll admit, a little bit crap my pantsy.
They were a might intimidatin'. I finally spoke up, "In case
you're lost, area 51's about fifteen hundret miles that way."

The taller one, in front, leaned right into ma face, "Take me to
your leader." He looked like he meant it too. How on earth could
I possibly know the whereabouts of President Reagan right then?
Crap, maybe he's off with his monkey somewhere. Who knows?
Not only that, I figured these monstrosities meetin' up with our
commander and chief could certainly only lead to disaster. That,
I had to avoid. I had to come up with somethin', so the only answer
I thunk of was 'Dumb Earthling', and that was the route I took.

As it saw my mind reelin', again it said, "Take me to your leader."
A little louder that time.

"Okay, okay. I'll take you there. Don't git your panties in a bunch."
I went with the first thing I thought of. "Follow me."

I took them around the long way to the kitchen, stalling for time.
I hadn't a clue how to be handlin' the matter at hand. I slowly slid
out the utensil drawer, reached in and pulled a piece out. "Here you
go."

"You said take me to your ladle. I figured you had a fresh batch of
stew cooked up and nothin' to spoon it out with. I'll admit, I thought
it was an awful long distance to go for a dippin' spoon, but who am
I to judge?"

"Okay, relax, relax. I got ya now. I'll take you right there. Follow me."
I was stickin' to the Dumb Earthling routine. Hey, better I git zapped
with some alien lazerbeamy gizmo than the whole world bein' taken over.

We went outside and headed toward my barn. "This is the way to
your leader?" It asked.

"Your leader's in here?"

Once we were standing in the middle of the barn, I pointed up to
wall, "There you go, what y'all traveled many light years to
acquire...my ladder."

"Leader, you simpleton, leader! Not your stupid ladder! If you do
not take me to your leader this instant, I'll gladly disintegrate you
into a pile of dust! Do you understand? Leader, take me to your
leader!"

"Whoa, whoa, whoa. Take it easy, Mr. uptighty. I understand, I
understand completely. I will, I'll take you there right now. Gee
willikers, what's up your butt?"

We left the barn and headed back to the house again. I was sure
this was going to be the last the world heard of ol' Jethro Higgins.
But again, better me than the whole world. I led them into the
bathroom. I stood over my cat's poop box and gestured with my
hand. "Okay, there you go. You said take me to your litter. There
it is. My cat's not going to be too happy 'bout it, but hey..."

He slapped his big, three fingered, hand on his face and dragged
it down, lookin' at me with pure disgust. "Listen, moron, I know
you know what I mean when I say leader. There's no way you can
be that ignorant. I have reached my end with this. Prepare
youself for..."

That's when ma wife came scootin' up the driveway.

One thing you should know 'bout ma wife, she grew up with four
older brothers and a pa that was mean as a bobcat. She's not much
for playin' games and very, very short tempered. She got out of the
car and strolled for the house like there wasn't even a spaceship in
her path to the door. She came in and set the two bags of groceries
on the counter, then turned and looked at the three of us standin'
there. "There you go, that's my leader." I said.

They walked up to her and she put her hands on her hips and tilted
her head. Without showing any sort of emotion at all, she asked,
"Is there somethin' we can do for you boys?"

"Are you this planet's leader?"

"Well, shucks, I sure wish I were. I'd be fixin' a lot of problems, like
tall, ugly ass, illegal aliens, for one." It didn't catch the hint.

"So then, if you are not, I demand, take me to your leader."

"Okay, darlin' I can do that. Don't git your panties in a bunch."

I chuckled because she said the same exact thing I did. I love her.

She waved her finger, "Follow me." She quickly scurried into the
front room. When they entered the room, she already had the
double barreled .12 guage pointed at them. "What was it you said
a minute ago?"

"Take me to your leader."

"Oh, I thought you said take me to your shotgun."


Ain't no more aliens come lookin' for their friends since she blew
them into the alien afterlife. Pert near thirty three years ago, me
and ma wife saved the world from an alien invasion.


A Best Friend for Life
A short fiction story. A young girl's lessons in love.

Pays: 10 points. and 52 member cents
Copyright © 2000 - 2023 FanStory.com. All rights reserved. Terms under which this service is provided to you. Our privacy statement.
top
You Have No Rank
Share 4 posts to be ranked.