A contest entry for my first job. 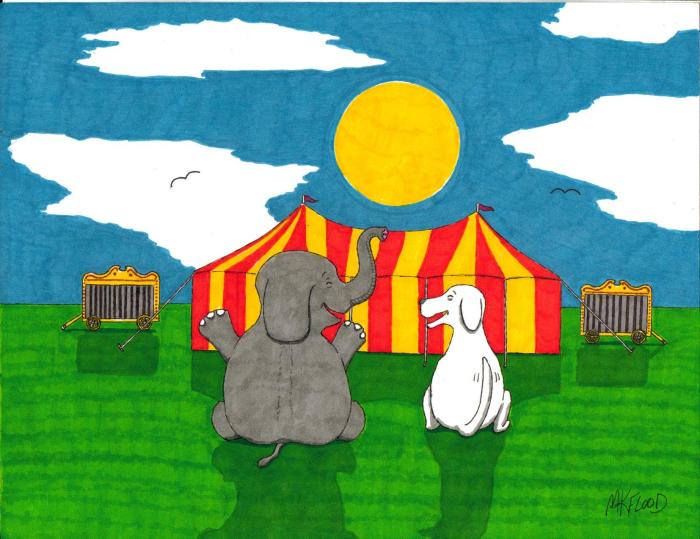 As I sit here contemplating my golden years, I reflect on the twists and turns my life has taken. Who would have thought that the steps taken when I was eleven would have been the pavement of who I am now. I remember many things of my past, but that moment was special and rather profound.

The previous summer, almost a year ago, I met my aunt and new uncle for the first time. My father had died, so my mother was surrounded by family. I remember my uncle who was new to the family taking time from the cackling women to talk to and listen to me.

He gently explained that although he couldn't do anything for me that year, he would definitely make plans to have me visit and work with him the next year, if I wanted to. Boy did I want to. It was every one's dream to run away and join the circus. It was a circus with rides, games, trapeze and animals- 2 lions, 5 horses, 1 elephant, 2 zebras. There was a code among workers that as such you were family.

The year passed slowly at times, yet fast at others, and suddenly summer break was here.
My aunt and uncle had talked with my mother, explained the plan and reluctantly received her approval. I would stay with them and I would get to work in the circus. There were of course numerous rules that I had to follow but I would be away from home.

It was agreed upon that I would get half my wages in a weekly pay envelope and the other half would be deposited into a bank account in my name, with my uncle as trustee. At fifty cents an hour, I figured that by the end of summer I would be rich. Those were the days.

The schedule was rather interesting. The circus would arrive at the town or city late on Wednesday and the crew would set up during the evening and part of the night. Everything was surrounded by a loose fencing, and each ride or tent had a specific place. By noon on Thursday, we would be open for business. Tear down would be Sunday evening after closing and we would pull out for the next destination early Monday morning. At night we pulled the trucks, trailers and campers into a rest stop and supper was made in one of the campers for the entire crew.

My aunt and uncle actually traveled year-round. They'd head north in the summer, then south in the winter. They had an assistant manager who oversaw things when they needed to be away. My aunt who met my uncle about fifteen years before, liked the sense of adventure and married him.

Home was a trailer, or a caravan, which I preferred to call it. It was not large, but it did have adequate sleeping. They had a room with a full bed at one end and I had a single bedroom at the other end. There was a third single bedroom that had been converted to an office next to mine. A small kitchen and eating area filled in the between space, as did the bathroom. All of the crew lived in similar spaces. Couples had smaller areas in a caravan divided in two. The single men and women each had a three bedroom unit to split. Everyone was housed.

During the five-hour drive from my home to the site, they both explained more about circus life. My aunt usually did admissions along with another lady and my uncle wandered the grounds with his assistant checking that all was well. I learned that my job would be ticket sales for the children rides. I would be inside a booth and thus protected from the general public. If it was a day unsafe for the rides to be open, I would help with ticket sales for one of the side shows, again from a booth. They were understandably concerned about my safety.

Because of the type of business and because I was family, I received a special permit to allow me to work at my young age. This was of course, provided that they met with the rules and regulations, which they did.

Each ride, whether adult or child's, had two workers, usually men, but my uncle had learned that a man and a woman did better for the children's rides. These people also provided a degree of protection to the ticket seller. The concept was that there were two admission booths, two for adult rides and two for children rides. Tickets were sold for the rides as package deals of ten or twenty and the pricing was pre-established and well posted. Actually, in all the summers I worked, there was never an argument nor a robbery at the booths. Now the game tents were a different story. Some people snuck in booze and when they got a snoot full, they became obnoxious.

It was agreed upon that I would have the first day to wander around the grounds to learn the setup, then I would spend two days with my aunt to learn the routine. She, as well as most of the workers, felt that there was no room for rudeness and bad manners. So, I was to be polite and always offer a smile. Dress code for the booths was anything that was clean and respectable. My work life began with t-shirts and shorts. When I was in the booth I could kick of my sandals or runners.

That first day had started with a general meeting. It was held at one of the four food tents and scrambled eggs, grill toast, tea and coffee were provided. Grace was said by one of the workers and I was introduced. No one wore name tags, but I was then given a company bandanna, which I could wear tied in my hair whether on my ponytail or to keep everything off my face or around my neck. This was our form of identification. There was a code among workers that as such you were family. We watched out for each other. I then learned that everyday started with a meeting and eating after grace. The fair grounds did not open until 11:30 am and closed down at 10:00 pm except Sunday when the hours changed to 1 pm and closed at 6 pm. This allowed crew to go to church and respected the family evening time.

I also learned that meals were provided throughout the day, as was water. It was not uncommon to see staff chowing down on a burger or hot dog. Late evening had funnel cakes waiting for everyone. If I needed the bathroom, I was relieved by one of the ride workers, and someone always checked to see what I wanted for lunch or supper and if I needed a drink. The ticket booths closed at 9 pm. They were long days to work but I enjoyed people and watching their antics.

I caught onto the routine quickly and the summer passed too fast for my liking. The crew gave me a going away party on the Sunday evening a week before school started back.

I promised solemnly that I would be back the next year and then looked at my aunt and uncle to confirm. They nodded.

The next morning as the circus went one way, we went the other, heading towards my home.
I had grown up over that summer. Physically I was a scrawny eleven year old, but in my mind and my heart, I was an adult.

I returned every summer until I was eighteen. I enjoyed my summer. I enjoyed the work which had expanded to other jobs and I enjoyed my dream of running away to join the circus. Except I didn't have to run away.


Thank you to MKFlood for the artwork 'O Happy Days'.
Pays one point and 2 member cents.


© Copyright 2022. aryr All rights reserved.
aryr has granted FanStory.com, its affiliates and its syndicates non-exclusive rights to display this work.