Another Day on the Job 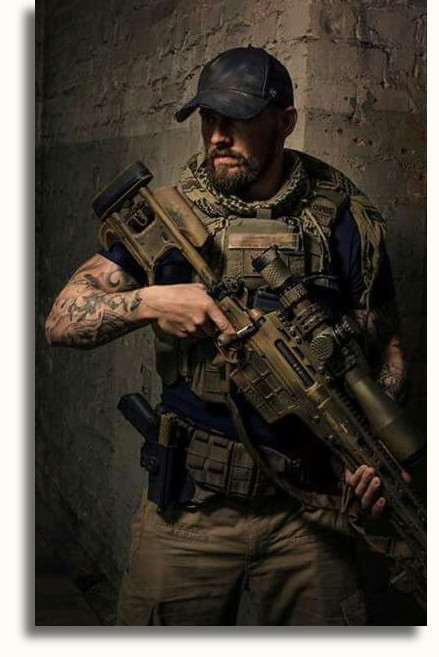 It was two in the morning when I unhooked from my parachute, beneath
the cloak of the moon. I had my orders and they were to be carried out
alone. I opened my compass and started hiking.

Once I was near town, I stuck to the shadows even thought the city streets
were dark, avoiding any person I came across. The layout of the buildings
were nearly exact to the map I memorized. Three houses down, on the
north side, and that's where I start earning my pay.

I climbed the outer bricks and quickly scanned the rooftop. There were two,
I'll call them, terrorists perched near the ledge. One, a lookout, the other, a
sniper. I silenced my .45 and slowly inched onto the roof behind them.

I drew my double edged dagger from my boot sheath. In one swift move, I
grabbed the lookout by his forehead, yanking him backward and beneath
the base of the skull, where the spine connects, I thrust the blade into his
neck. Before his body fell, I already had the .45 aimed at the sniper's head.
Before he could gasp for breath, he was dead.

I climbed back to the ground, ready to continue. I looked in the bottom window
and the ground floor was clear. My motto is, "F them, go straight through the
front door." and that's exactly what I was going to do. The stairwell had thirteen
steps to the next floor. That means there could only be, at the most, six gunmen
on the steps. Another motto: "Always over calculate."

It was big gun time. Stealth was no longer going to be an option. The charge I put
on the front door would easily kill the first one. That's five left.

The blast blew the door into splinters along with bad guy number one. There were
only two more in the stairwell. Easy pickin's. Before I reached the top step, in three
mighty bounds, I lobbed a flashbang grenade into the left room. I swiftly murdered
the four blinded enemies there with headshots and instantly turned around for the
only room left. If my target wasn't dead yet, he soon would be. I shoulder dove into
the door and shot as I fell. One of the two brutally splattered all over the back wall.
The second grabbed my hostage and put a pistol to his head. Before he could even
get a word out, I charged him, slamming him and my hostage to the floor. When he
stood, I blocked his attack, crammed a grenade in his mouth, pulled the pin and kicked
him out the window. Simple enough.

I slapped the vice president's face. "I move, you move! I stop, you stop! Got it?"

The van outside had the keys in the ignition. "These people are morons." A mile
and a half later, the helicopter picked us up.

Another job well done. Another hefty check to a mercenary. I love my work.