We live in the Netherlands. I am Dutch, Robert originates from Scotland. We were married for nearly 40 years. Robert died 15th December 2017. I miss him so much. After several illnesses I lack a.o concentration and memory.

A story about not dating but get engaged.

A chapter in the book Our marriage

We did not date, but got engaged. 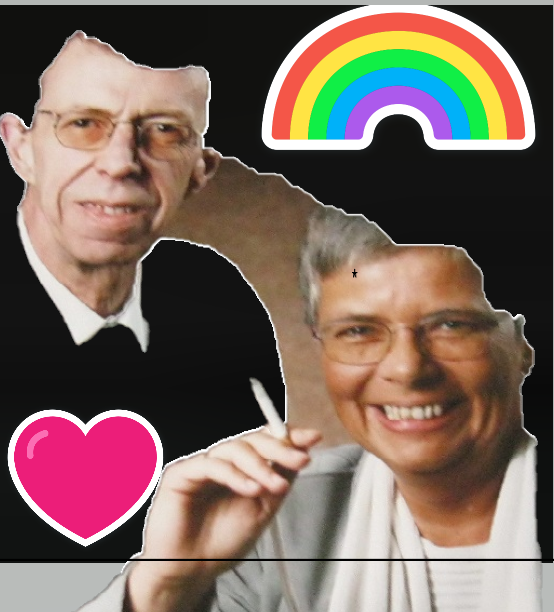 By sheer coincidence we met, many years ago.

A none of my friends could go at the time I had planned for this holiday, I was forced to go by myself. I did not like this, and nearly sold the ticket to my Mum. She would or could not help out.

But I don't get caught by one mishap. On the plane I met this lovely old lady, ideal to be my chaperon. She was so nice, we agreed to meet at breakfast. Unfortunately for her this stayed a one off.

The day after arrival I intended to go to town. I met this Italian guy who had absolutely no interest in culture. So I was forced to chuck him out of the window. Not literary, just did not make any next appointments.

At night there was a hotel disco. I went down there as I liked and like dancing a lot. Here Robert approached me ( it turned out later he had already spotted me at breakfast time ). We fell for each other immediately. We danced some, had interest in several things. If looks could have killed The Italian bastard would have killed him, but he did not.
At the end of the evening Robert walked me back to my room. Now here our stories split or differ quit a bit. Robert claims, as I invited him in for coffee I seduced him.
My plain mind thinks no way, coffee is not an invitation for sleeping together. In his country it is also not that, there it means: please leave sometime soon.

I hired a car, and intended to drive it too, cause it was just insured for me.
We travelled a bit. Robert's friend Brian joined us, stupid guy. But they were on holiday together.
I was not used to driving these mountains with steep corners. O Robert wanted to take the wheel from me. I refused of course. We both got somewhat angry with each other. A deal was made I the middle. He'd handle the break, while I did the rest. This was needed as the normal breaks were not up to it.

Anyway we got safely back to the hotel, splitting Brian away from us two.

Another day on my last part of the holiday, we went to town. I was determined to buy the ring I liked. My money was burning in my purse. Money should roll at any time. With some struggle Robert and Brian managed to keep me away from the shop. I threatened to loose my temper.
But when I left to go home, I was engaged to be married. Beaming like a house on fire or a lovely hot sun.

Because I did not trust my parents to agree at all, we went to buy real wedding rings. No way could they stop us then. My parents were unpleasantly surprised, partly as they saw their eldest daughter leaving the country. They also assumed that his education was no good enough.
But in Holland he'd be a 'Register Accountant', in the UK they call this Registered Accountant.
I think I might be mixing things up a bit, sorry.

His parents were somewhat similar. One thing was truly and totally different: his father had always abused him from age four years. Why and how we never completely knew. When I asked hid sister she'd go completely ballistic. She is a fat pig, so different from Robert. She was hid father's favourite though. His father even tried to get her on a private school. Thy would not take her. At last she became a teacher of artwork, and cooking. You've never seen a kitchen as dirty as hers.

This happens a lot. People work in a certain area, doing well. But don't do anything at home.
Robert and I must be exceptions to this rule.

I wanted to write some more. First I have to take Smokey out on the scoot -mobile. Smokey only had two runs again. Now I am back-LOL.

Believe it or not, Robert helped me by phone, to get the television in the bed room working again. So a bit later I can watch tele in bed again.

These things can only happen after so many years of marriage. Agreed?

Tomorrow, Hell brakes loose, if I can't see him.

Photo was made by a The Hague photographer, shortly after we were married.
Pays one point and 2 member cents.