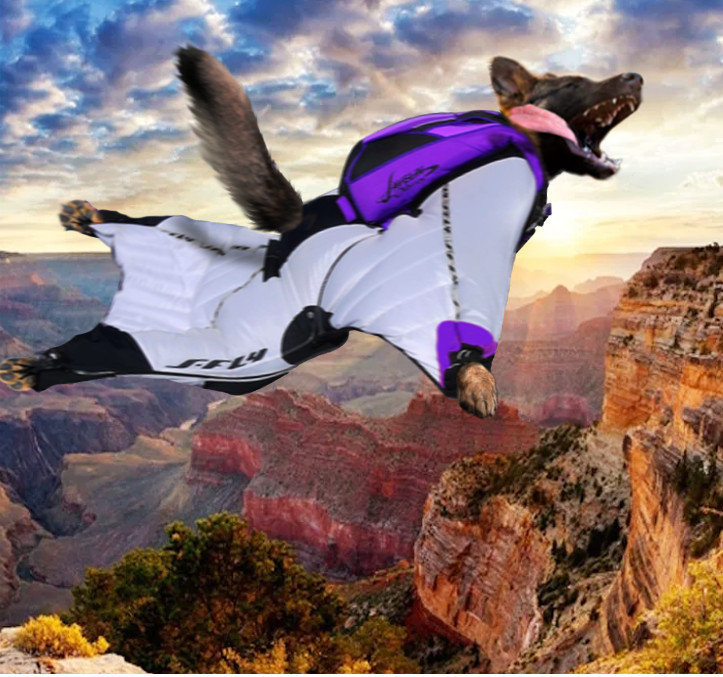 I called a couple of my friends and scheduled another weekend getaway out to Utah. I always foot the bill for everyone because the trips are usually just for my own entertainment. Well, mine and my dog, Sam's. He's a man's best friend, that's without question.

This time, the destination was Cedar Breaks National Monument, a beautiful canyon on the southwest side of Utah. My pal, Dave, owns a small-engine airplane with a sliding side door. I've leapt from that door, parachuting, more than two hundred times. My other friend, Brad, waits at designated landing coordinates with his four-wheeler Bronco and a tracking GPS in case I miss. This time, I was trying something different.

As we ascended skyward, I put our jumping gear on. Sam's suit was quite expensive and tailored to his canine measurements, but I knew it'd be well worth it.

I looked at Sam with wide, excited eyes and yelled, "Wingsuiting? Who wants to go wingsuiting?" He jumped around in circles, wagging his tail in anticipation and barking with ecstatic enthusiasm. I pulled the door open and got ready. He stood at the exit, fervently shaking, just waiting for the command.

"Go," wasn't even out of my mouth before Sam dove into the open sky. I instantly followed. For the first few moments of free-falling, I could tell he'd forgotten what I'd been teaching him. He was flailing without focus or composure. I pulled my arms and legs in close and went aerodynamic. Once I reached him, I maneuvered to face him and pulled his front legs outward and he caught the gale. That's when he remembered all the wind machine training. It was awesome. He flipped and turned and flew, the whole time, his tongue flapping in the turbulence.

He followed me for a couple of miles and that's when I decided to try other tricks he learned. I slowed down until he was flying beside me. I yelled, "Roll over!" He tucked all his legs in and flipped forward eight times, then expanded again. "Good boy!" I'm sure his tail was wagging but the wind velocity hid it.

"Play dead!" His whole body went limp, and all of his limbs jerked and flopped in the air as he plummeted toward earth. "Good boy!" I hollered again.

Reaching the threshold, I yelled, "Pull!" Sam bit down on the chewy-toy covered ripcord handle and yanked. His parachute has a graphic print of a seductive, cartoon poodle posing on a bear skin rug. I laugh every time I see it come out.

We softly floated to the ground. After unstrapping, he slathered me with sloppy, tongue lappings. I patted him on the head and tossed him a doggy treat. We hopped in Brad's truck and made the two-day trip back home.

Next month I'm thinking about taking him bungee jumping.

True: I had a German Shepard named Sam that I took everywhere.

As usual, I created this silly picture myself from several different Google Images.

Thank you for reading.