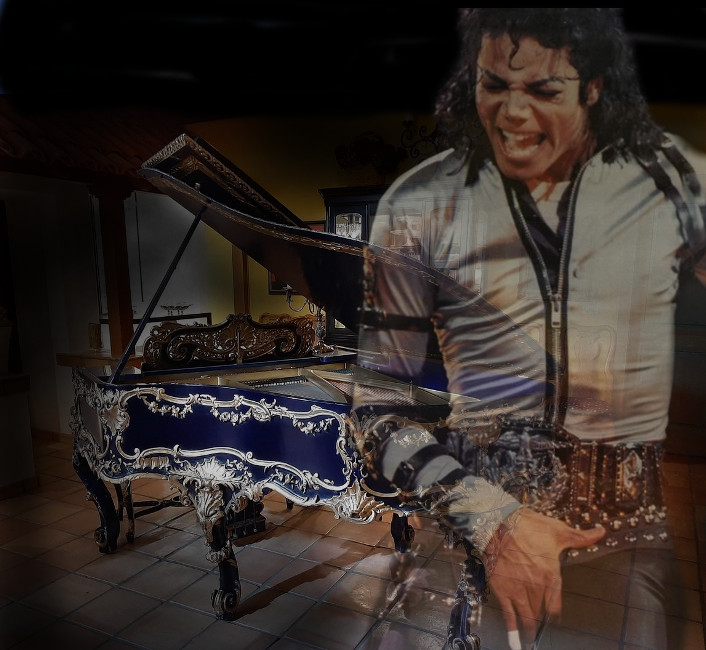 My mother really loved Liberace in his day. For her eightieth birthday, I bought plane fare and a private showing to the Liberace Museum to surprise her. It's now actually located in Michael Jackson's Thriller Villa in Las Vegas.

The plane landed and the first night there, we blew a little money, ate some delicious grub and watched a few shows. Mom had a blast, thinking this was her big surprise. The next day we did the same thing but around seven, we jumped in an Uber and headed to Michael's place.

We were ushered inside the massive estate. After walking a while, we made it to the museum of Liberace. Mom's eyes nearly teared up. She gave me a big hug and we went inside.

It was getting dark outside while we walked about the place. I was thinking to myself, "Come on, man, where are you Lib? Just poke your head out long enough to say hi."

We were by one of his many pianos, then the air turned cold. The lights dimmed and the atmosphere changed to just plain eerie. From behind the piano, a puff of twirling smoke appeared from nowhere. It spun furiously and grew in size. It started coming toward us, literally through the piano. As it drew closer, still spinning, it took shape. It was a thin human figure. We both took a step back. Just before it reached us, it instantly stopped turning, grabbed its groin and, in a high-pitched girly voice, yelled, "Ow!"

It was Michael Jackson. I had my fingers crossed for Liberace but noooo.

He started dancing, like trying to impress us, then went into his signature moonwalk move. He was floating over the floor so I thought of how lame it was without gravity actually working against him. I just shook my head. Apparently he didn't like that because he instantly flew across the room, right up in my face, and started singing, "Beat it...Beat it."

"You're the criminal, chump, charging so much just to see this freak show. So, we're going to keep walking to see the rest of this ridiculous monstrosity."

"Don't stop 'til you get enough," he sang with evident sarcasm.

I got right back up in his transparent face. "Don't worry, we won't."

He floated backward a little bit, put his arms out and palms up like he was ready to rumble. "Wanna be startin' somethin'?"

I was livid. "I wanted Liberace's ghost, not you!"

He was hurt but I didn't care. He simply just floated behind us while we looked at everything else. He pretty well kept his mouth shut for the rest of the tour.

Just as we were leaving, I turned and said, "Sorry for getting so uptight, Mikey. I was just hoping we might have seen Liberace as well but what can you do? I'm going to call our Uber driver now."

"What's the difference, he's not going to be one of your young Neverland sleepovers!"

After we got back home, my friend asked me how the Liberace Museum trip went.

I just looked at him, shook my head and said, "Bad."

The italicized phases are all titles of Michael Jackson songs.
Thank you for reading if you made it all the way through this ridiculous piece.