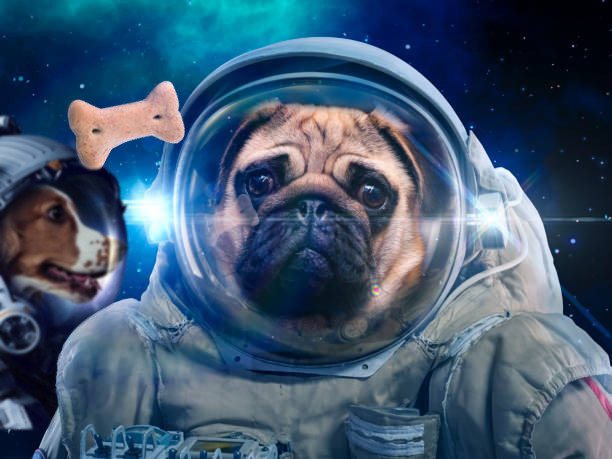 My dog sitter called off at the last minute, claiming
her boyfriend got monkeypox. I asked if she knew how
he got it, trying not to chuckle at the sixteen-year-old's
incomprehension of her 'straight' boyfriend's loyalty.

So, quickly my plans changed. I looked down at my two
dogs. "Ride? Wanna go for a ride?" They bounced around
with glee. Of course, they did.

I grabbed my packed bag and made a quick phone call to
NASA and we took off for our trip...our trip to the moon.
Yep, you heard right, the moon.

Dog space suits were invented a long time ago, back before
humans ever even tried being launched into orbit. Ralph
and Sam had it made. Their suits would most likely outlast
my own if we got stranded on the moon.

At the top of the platform elevator, they chased the ball I threw
into the door of the Apollo 22. After securing their bubble helmets
and strapping us in, we were ready for countdown. Each number
down from ten I yelled, "Arf!" Then we blasted off.

The doggie treats were rationed perfectly. Only half were gone the
day we landed on the moon. Our two weeks of collecting moon
rocks and dust for research had begun.

After being cooped up for so long, I knew they were ready to
get out and stretch their legs. I bent over and excitedly said,
"Outside? Who wants to go outside?" They both leapt in
anticipated joy. I put their leashes on, unsealed the pressurized
cabin door and took them both for a float. Gravity boots hadn't been
invented for dogs yet.

I had to work so I tethered them to the flagpole that Neil Armstrong
fellow left there. A couple minutes passed and then they both went
crazy, yapping at something that spooked them, I guess. They just
wouldn't stop. Houston heard the commotion through the microphones
and told me to pack it up and head somewhere else to dig. I loaded
my boys back in the craft and fired up the engines. We flew halfway
around the moon and stopped for more samples. This time, I gathered
for nearly two hours with them floating outside the Apollo without a
sound except for panting.

I decided to go back and collect more rocks from where we
first landed. The same thing happened, they went nuts. They
would not stop yapping. I climbed back in so we could move
again but this time the Apollo didn't start, no matter what I tried.
I radioed in to Houston, explaining my dire situation.

"Where exactly are you located?" They asked.

I replied, "On the bark side of the moon."