My mother's 'Lay' ancestors lead back to the Mayflower. 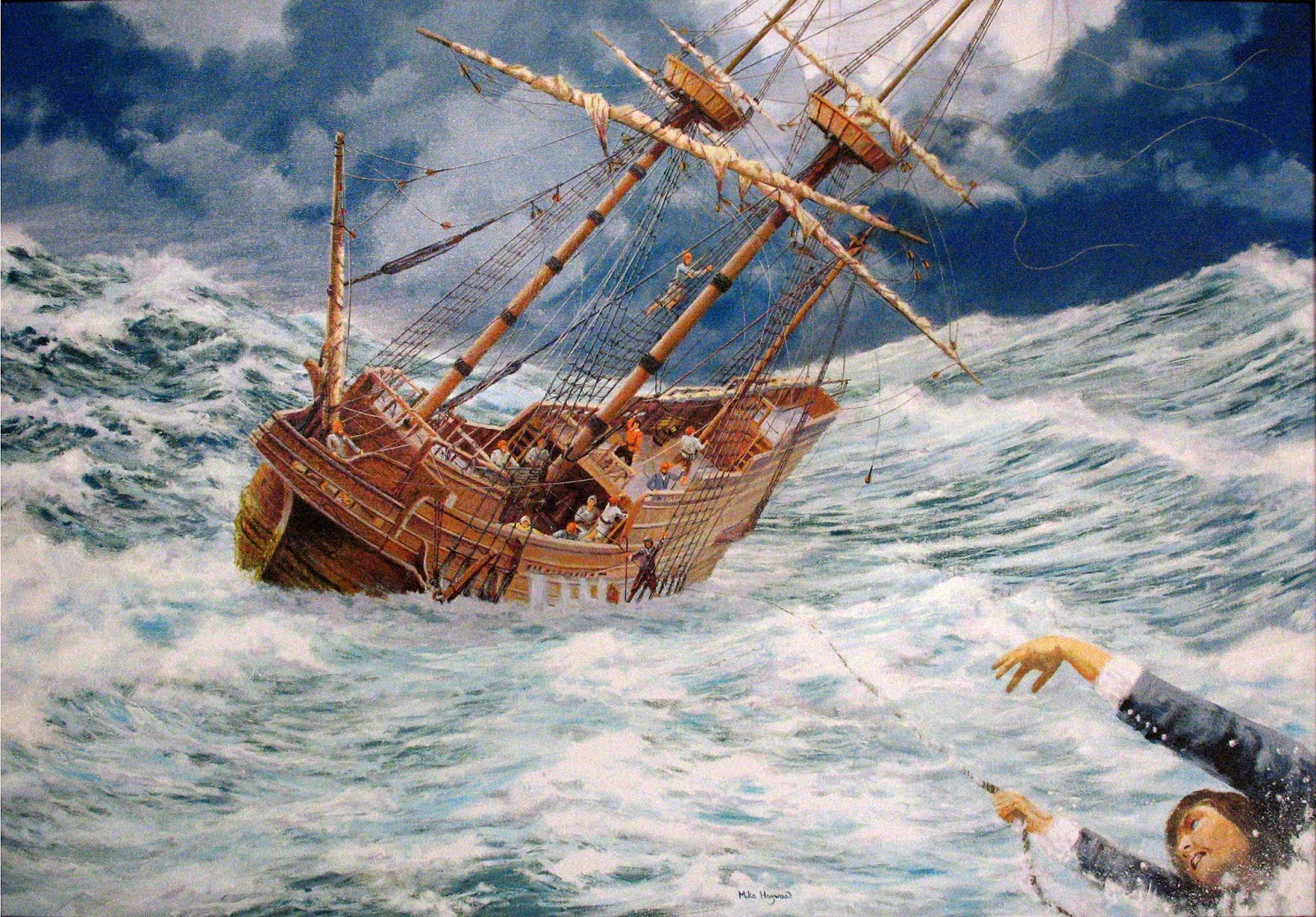 I had to go back a lot of generations to realize, some of my ancestors were on the Mayflower which departed Plymouth, England and docked, in November of 1620 on the shores of what became the first English colony in the new world, the Virginia Colony.

I found out of 120 passengers on that ship, five of them were my ancestors. The Tilley family accounted for three of them, consisting of John Tilley and his wife, Joan Hurst, a widow of John Rogers and their young daughter, Elizabeth. Elizabeth would marry into a union which would produce most of today’s Mayflower descendants.

John Tilley’s wife, Joan Hurst, was the youngest daughter of Baron William Hurst, the son of Sir Henry Hurst and Lady Agnes de Dalton. Most of the passengers on the Mayflower were of simple lineage. Joan was an exception. John and Joan Tilley’s daughter Elizabeth was 13 at the time of the voyage.

John Howland was another of my ancestors. John, at 21, from Fenstanton, Huntingdonshire, England, was an indentured servant to John Carver, a man of means, who was willing to use his personal wealth to finance the trip for a group of Separatists from the Church of England. The passengers came from Holland and England.

John Howland made a big splash (pun intended) on the trip crossing the ocean. Numerous artists have attempted to paint depictions of what took place.  John, who was described by a writer of his day as ‘a lusty young man’, went out on the deck of the ship during a severe storm. He was swept overboard into the churning sea. He managed to grab a topsail halyard which hung overboard and clung to it, until he was able to reach a boat hook. Some of the fellow passengers managed to drag him back on board, close to death from drowning. Thankfully, he survived, or maybe many of us wouldn’t be here today.

John Carver was elected the governor of the group, while still aboard the ship. Howland became his personal secretary and lived in his home. Elizabeth Tilley’s parents died shortly after arriving, and the Carvers took in their orphaned daughter. In the Spring of 1621, both John Carver and his wife died. John Howland became free from the indenture, and took an active role in helping the others keep the waning colony going. Many of the passengers didn’t survive the first hard winter.

In 1625, Elizabeth Tilley was 18, and she and John were married. There has been a lot written about John Howland and Elizabeth, because so many people have descended from their line. John and Elizabeth had ten children, and all of them survived and had large families. At present, it is estimated there are about 35,000,000 of the Howland and Tilley descendants worldwide. This information makes me feel less than special.

Their second daughter, Hope Howland, is the child from which my family line descended. She married John Chipman, a minister, who migrated from Dorchester, Dorset, England to the colonies in 1637. A lot has been written about him as well. He and Hope were the parents of eleven children.

The last of my Mayflower ancestors was Richard Warren from Huntingdonshire, England. I get the impression he was not one of the Separatists, but rather he came alone, leaving his wife and children to come later after he’d checked out the area and decided if it was a suitable place to live. The rest of the family did arrive shortly afterwards. He was listed as businessman. Men with money were needed to help fund the trip. The fact that he was listed as 'Mr.' indicated he was of  inportant linage and possibly a title holder.

The Honorable John Samuel Chipman, son of Hope and John, who married a member of the Richard Warren line was a magistrate and member of the general court in Rhode Island in 1722. His sons were patriots who fought in the American Revolution.

From that point, we come down through five generation of Chipmans. The families migrated from Barnstable, Massachusetts, through Connecticut, into North Carolina. The fifth generation, Hezekiah Chipman patented land and was listed as having a farm in Alabama. His daughter, Eliza Chipman was my great-great grandmother and was married to James M. Lay, who moved from South Carolina into Greene County, Alabama.

When Civil War broke out James and Eliza Chipman Lay’s son Lewis Simpson Lay, who was farming land in Mississippi at that time, was required to serve in the Confederacy. He was married to Nancy McClendon and the two of them were my great grandparents on the Lay side. Lewis was taken prisoner in Resaca, Georgia. The POWs were put on trains under guard and taken to Indiana to be held. From what is now Fort Harrison, near Indianapolis, Lewis. S. Lay wrote to his wife, Nancy McClendon Lay. The letter was dated June 6, 1864.  It reads:

Dear Beloved Wife,
Will write you a few lines to let you know that I am yet on the land of the living. I am well. This morning I was captured at Resaca, Ga. On the 9th day of May, with 7 of my Co.  Will give you their names so you can send their families word: (Here he lists the names of the seven men taken prisoner with him.)

We are faring very well.  We get enough to eat and have ground enough to stay on to exercise and good barracks to stay in at night. My health has been good since I’ve been here. The Federals treat us very well.

When you write me you will have to send your letters by City Point, Va. We are not allowed to write but one page.

Dear wife, I haven’t heard a word from you and my dear little children since I have been in prison.  Hope the Lord will bless you. Pray for me. I am praying to be once more set free to return to loved ones at home.  Hope this may find you and the children well. Often think of you so far away. Bye, Bye,

The letter was written on tablet paper and pencil, and is still very legible. One of my cousins has the original. There is so much to be learned about genealogy on the internet.

I hope you don't find these names too confusing. My children are more interested in stories than mere names. I was surprised to learn there were some stories written at the time these people lived. Discovering them is like locating a treasure. Learning about my ancestors is making my own life a little richer.


I'm sorry there are so many names. Each time a generation passes all the ancestors double. Soon, you have hundreds of people with who you share bits of DNA. I'm not including nearly all of the names. Picture depicts John Howland
Pays one point and 2 member cents.