My maternal grandfather died before I was born.

The Grandpa I Never Met 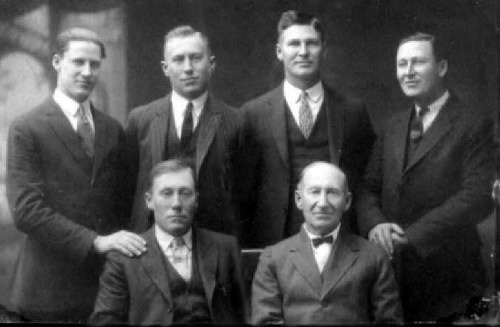 The earliest record I’ve found of my Lay family in England dates back to around 1600 in Great Bromley, Essex, England. But the first Lay to enter the colonies was Abraham Lay, a 9-year-old cabin boy born in 1701. He was apprenticed to Captain Charles Broadwater, whose ship, Robert & John, made trips to the colonies to bring tobacco back to England. Abe's family had fallen on hard times, and the mother, having trouble feeding everyone, allowed him to go with the captain.

The first of many voyages reached the colonies in June of 1715. The boy continued to sail with Captain Broadwater for several years, until the captain obtained land and started a plantation. Abraham stayed on as an apprentice, managing the plantation until his contract expired, and he was free to start his own prosperous plantation. He was a neighbor and friend of George Washington in Fairfax County Virginia.

Slavery was a way of life for all plantation owners. Abraham, having been indentured himself, had lived with the slaves at the time he was managing the plantation for the captain. He understood their situation and gained their trust and respect. He treated them kindly and showed compassion, but like others of the day, he saw them as property. He’d avoided separating families, but when it came time to make his will, the slaves were left to his wife and several of his daughters. Sarah, his wife, asked that one she'd grown attached to be set free.

My grandfather, Robert Buckhanon Lay, known as Bob, was born five generations later in 1858. Descendants of Abraham continued to own plantations and slaves, until the results of the Civil War ended slavery. By that time, my Lay ancestors had migrated down into Georgia and Alabama and had eventually obtained farm land in Mississippi.

Although, I never met my Grandpa Lay, who died the year before I was born, I knew all of his children who were my aunts and uncles and my mother. Mother only shared both parents with one brother. What I know of Grandpa is what I’ve learned from those who knew and loved him.

Bob was only 4 when the Civil war started. He had three older sisters; the oldest was 10. His mother also had a baby boy less than two. Her husband, Lewis, served as a Confederate soldier. The family farm had no one left to keep it going while Lewis was away. Bob was seven by the time the war ended, and his father came home. Early on, he was expected to help with the chores. By the end of the war, there was another baby boy and a year later another sister was born, who died at age four.

Altogether, Bob had six sisters and three brothers. When he wasn’t in school, he was working on the farm. When he was 24, Alice, the girl he had been courting, agreed to be his wife and they started their own farm. They had their first child, a little girl, the following year. During the next 19 years, there were eleven children born. One son was born with birth defects, leaving him crippled and slightly mentally impaired. One daughter was born with a cleft palate causing her speech to be difficult to understand.

After having so many children, Alice was in poor health, and she suffered from epileptic seizures. The doctor warned another child would likely take her life. Alice’s health continued to decline, and she died at forty-four. Her last child was five when she passed away. Bob was devastated. Three of his children had married and had homes of their own, but he still had eight children with him. The two oldest girls helped with the cooking, but they were courting age and would likely marry soon. Bob was grieving the loss of his wife, but he felt he needed to find another helpmate soon. He had a 5-year-old son and handicapped child of 7.

When he approached the widow, Annie, with a marriage offer, her response hadn’t been encouraging. She was nearly 20 years younger, but she agreed to think about it. She finally consented, and he couldn’t believe his good fortune, even though she would be bringing a baby along with her. She was a fine-looking woman of 30. At 50, he was still young enough to have an active sex drive. He loved all his children, and he knew he would love her son as well.

Annie wasn’t enthusiastic about having more children, but she felt sex was a married woman’s duty and a burden she was expected to endure. They had been married two years, when a son was born. It would be 4 more years before another child was born. This time it was my mother. Mother was three when Clyde, the handicapped child, died. The family grieved, but the doctor hadn’t expected him to live past infancy. He was 17.

The Lay boys were a handful. No one had disciplined them, and they gave my grandmother fits. They ran the countryside and developed a hearty taste for liquor, in spite of the fact their father was active in the Baptist church and didn’t drink. They experimented with making their own liquor, and several of them became alcoholics later in life. At one point, they overstepped their bounds with my grandma by getting my mother, who was only 5 at the time, drunk.

Mother was the last to marry and leave home in 1932.  Her dad died four years later. My grandparent’s marriage lasted 28 years. Bob was 78 when he had his fatal heart attack. At the funeral service, officiated by four ministers, he was called one of the town’s most prominent and best-known citizens. All of his children grieved his loss. He was loved and respected by everyone who knew him. At the time of his death, he had 12 living children and 29 grandchildren.


This is about the how the Lay family entered this country and specifically about Robert B. Lay my grandfather. The picture is my grandfather and five sons by his first wife Alice.
Pays one point and 2 member cents.