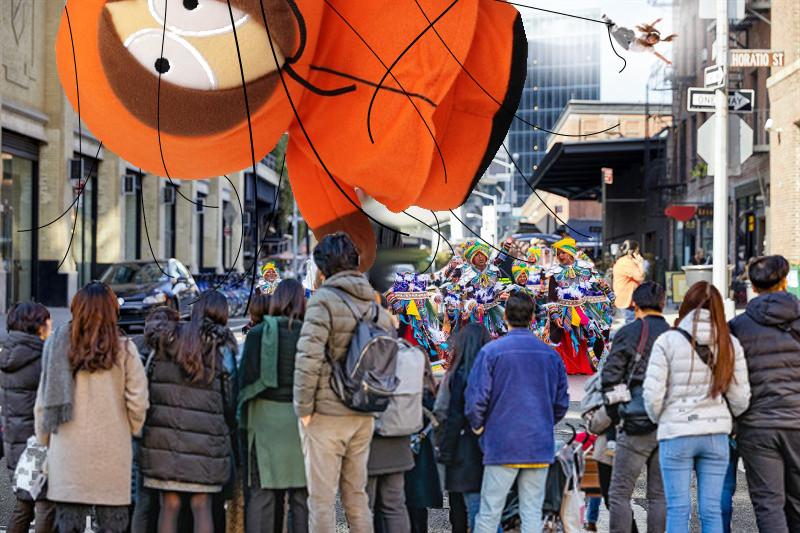 I can't believe our parents let us even watch South Park when we were kids
but, oddly enough, they did. They were cool like that. My sister, Brenda and I
lived on Comedy Central and all the ridiculous shows they had.

I forgot what it was even for, but our little hometown of Wapakoneta was
having a parade and News 13 leaked that among the floats that year, the
characters of South Park would be joining the regular roster of balloons.
Sis and I freaked out. Nothing was going to keep us from seeing this
astronomical event. Our parents graciously welcomed the solitude and
let us go to the parade by ourselves. Brenda brought her best friend,
Kimberly, along.

We watched and waited with anticipation as the parade went by. Then
they came around the corner, the four giant balloons of Kyle, Stan, Cartman
and Kenny. We were ecstatic. We cheered with everyone there as they came
up the road. It was as beautiful as a country rising sun. Just as they were
passing us, right overhead, a strong gust of wind came down Pearl Ave.
The Kenny balloon flew sideways, right into the electrical wires that lined
the street. A transponder blew and popped a hole in Kenny's left side. No
one holding the ropes could hang on as the balloon spiraled out of control.

The tethers flung aimlessly. As we tried to run, one of the ropes wrapped
around and caught Kimberly's leg, yanking her into the air as Kenny
ascended into the sky. Just as the balloon lost all of its air, the rope
loosened and dropped Kimberly ninety feet to her death on the sidewalk.

Someone in the crowd yelled, "They killed Kenny...and some little girl!"

Then, on cue, someone else in the crowd hollered, "Those bastards!"


The night after Kimberly's memorial, we were watching South Park and
Kenny said something unintelligible as usual. But this time I swore, within
the gibberish, I heard him say, "Don't cry for dear Kimberly, she's now a
spirit of the Lord."