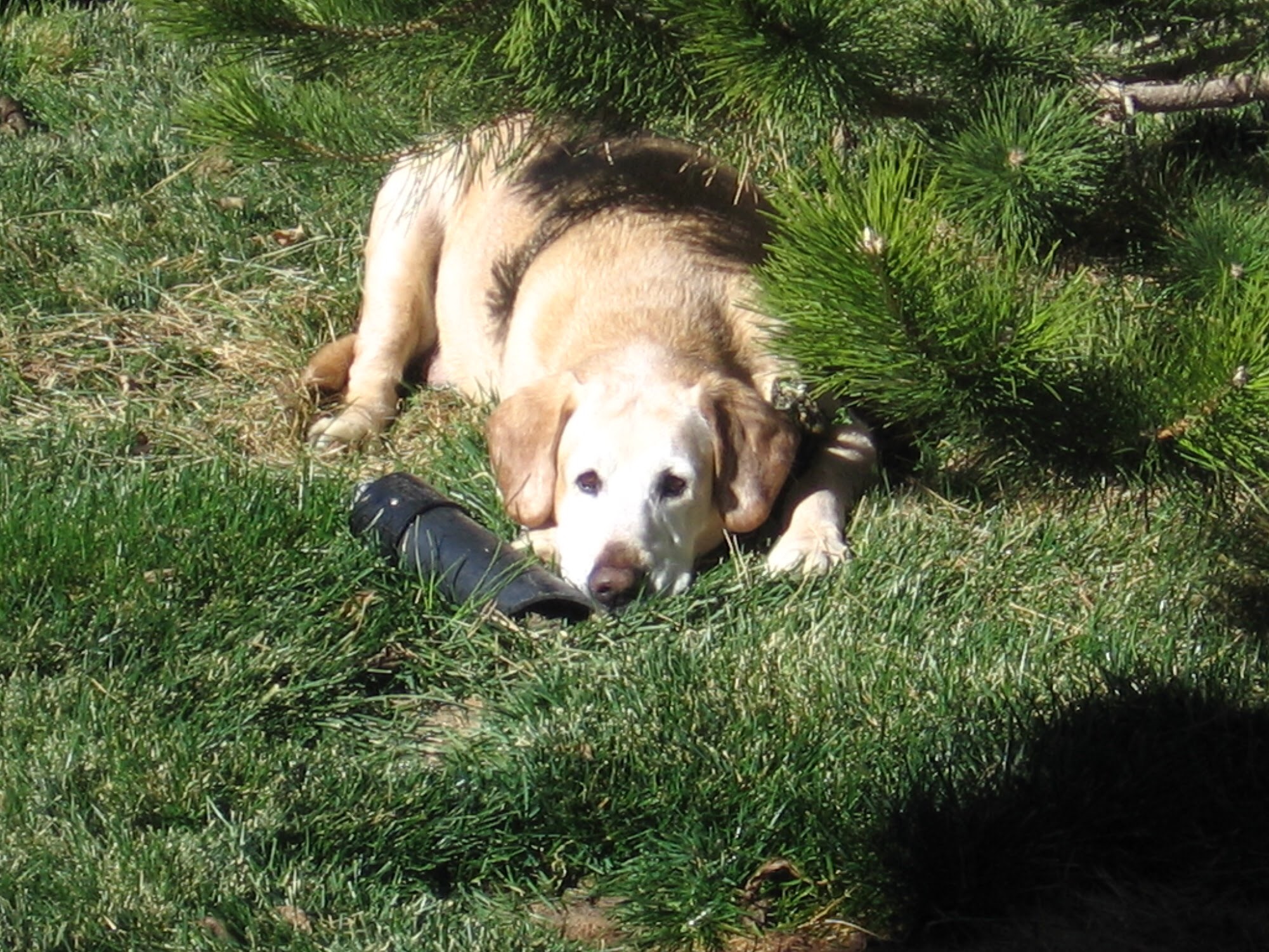 It was a hot sunny day in South Littleton, Colorado and we had taken all of the dogs on a walk to the reservoir for the first time. We had heard about it from other dog owners but had never been there ourselves. Now here we were walking the trails me, my husband, Buddy, Kidd and Copper. We had just adopted Copper from a rescue in Evergreen, Colorado. He was a Senior Citizen and a purebred Yellow Labrador Retriever. Copper's previous owner had committed suicide so he had lost his home under tragic circumstances. Copper was yellow with white splashes throughout his coat and he had the biggest feet I have ever seen on a Labrador. They were as big as the palm of my hand (and I have big hands) and he had the softest, golden colored eyes. This was one of his first long walks and I was walking sweet Copper while my husband was up ahead with our two younger dogs. While the other dogs rushed ahead, Copper took his time and stopped to smell each little flower and plant we passed along the almost barren path. He wasn't slow by any means. In between points of interest, he would trot along with his head held high, nose in the air enjoying each aroma.

Eventually we reached the path down to the beach. I approached it with some trepidation. It was smooth but it looked a little bit steep. I wasn't sure if Copper should be attempting such a high angle. The next thing I knew I felt a tug at the leash in my hand and almost lost my balance as Copper went down the hill ahead of me.

Once we were at the bottom Copper became a whole new dog! He started barking and pulling on his leash and trying to get in the water! The primary focus of his attention seemed to be a half a dozen or so ducks sitting just off shore near a small island. I laughed! "You want those ducks do you?" "Good luck!" I said as he looked longingly at the ducks then back at me. "I think they can fly faster than you can swim. " Again, the forlorn look. Then, he turned and ran straight into the water jerking the leash right out of my hand! To say I wasn't expecting it was putting it mildly! As I watched him swimming toward the ducks I ran into the water, shoes and all, calling his name all the while praying he wouldn't grow tired. Wonder of wonders, he turned around and came back to the shore. I grabbed his leash and hugged him and told him he was a good boy for coming.

Squeaky tennis shoes and all we started heading back along the shoreline. The dogs walking in the water, Copper watching the ducks as they floated by. His facial expressions were adorable. You could tell he wanted to go and chase those ducks so bad. Every now and then he would venture into deeper water and I would have to remind him "no ducks."

Later, on the ride home Copper was so worn out he hogged the back seat so badly that poor Kidd, our Greyhound had to stand on the floorboard behind my seat. Buddy our other dog wouldn't give an inch of his space. Poor Kidd looked so dejected. Fortunately, we didn't live far. Meanwhile, Copper was sleeping soundly, oblivious to all the trouble that he was causing. He just kept snoozing away. I couldn't help but laugh. The old man had taken over. Without even trying! Who would have thought it possible.

I looked back at all three of them and thought about how I was worried that they might not get along. I hope this lasts, I thought. As I watch the sun sink down I wiggle my wet toes and think about Copper and the ducks. Pretty spry for thirteen! Old timer, you may have a few miles on you but I'd say you still have a few more to go.

I reach back and stroke his face and think, I sure hope we have a lot more days like this one old man. After all you've been through you deserve nothing but the best.

I sit back in my seat and close my eyes. Content with the day and content to be with my "family." Three boys. And they say boys can't get along. Not my boys. Not with Big Copper around.


Copper went on to live another two and half years. Every morning and every night he would bark for his breakfast and dinner. Then he woke up one morning and he did not. I took him to the Vet and they could discover nothing wrong with him. Later that evening he could not walk. The next day he passed from cardiac arrest. It all happened so fast. His big loving heart just got tired I guess. When he died he took a piece of my joy with him. Copper was like an Angel sent to cheer me everyday. It was impossible to be sad with him around. I have, do and always will love all my dogs but Copper touched me in a way that no other dog ever has before. He was my Joy Boy. He died February 18, 2009. A piece of my heart died with him.
Pays 10 points and 1.00 member dollars.


© Copyright 2022. Ramona Agin All rights reserved.
Ramona Agin has granted FanStory.com, its affiliates and its syndicates non-exclusive rights to display this work.