Welcome to the zoo contests entry. 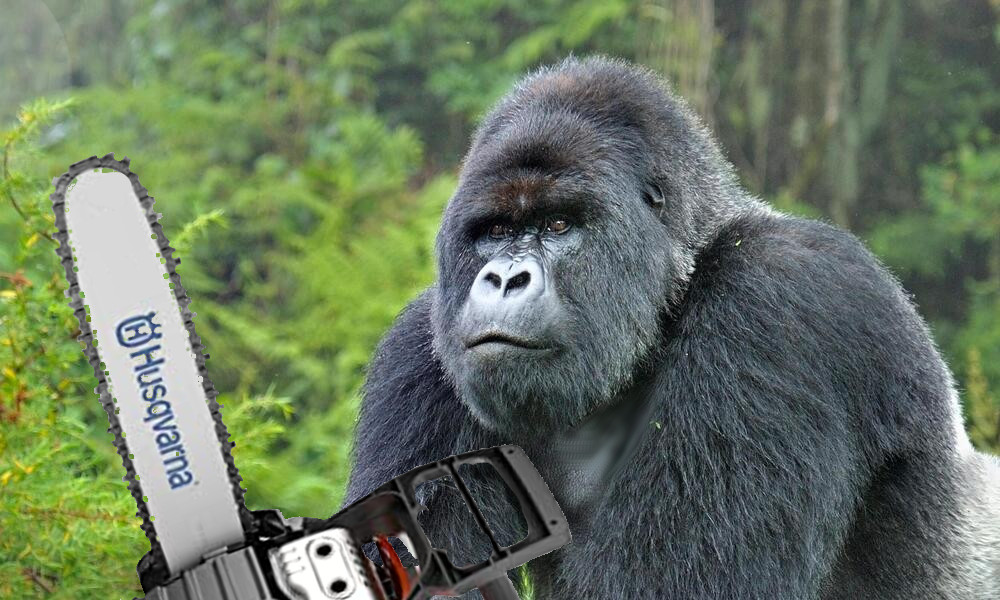 Dan took his family to the zoo for his son's fifth
birthday. They were in the petting zoo part of
the park. His son was laughing and having a grand
time playing with the cute baby goats and sheep. Dan
kept filling the feeder machine with cash for his son's
amusement.

On the other side of the park, the zoo had one part
sectioned off for tree trimming work. Thirty feet up
in the lift bucket, Doug was chainsawing the overgrown
limbs. Moments later, the walkway gave loose to the
weight of the lift tractor. A piece of concrete broke free
and the left rear tire collapsed into the dirt underneath,
flinging Doug and the chainsaw out of the lift bucket and
straight into the gorilla enclosure.

The ground collapsed even more and the whole lift tractor
flipped. The extended arm crashed over the barrier and landed
right in the Bengal tiger habitat, with the tractor still caught
on the safety rails above.

After the fall, Doug managed to lift his head up and watch in
horror as Bobo, a massive silverback gorilla, picked up the
humming chainsaw. The odds of him picking it up by the
handle were astronomical, but magically, he did. Bobo pulled
the trigger. When it startled him, he turned and the chainsaw
buzzed down the little tree beside him. Instantly, he knew how
it worked and the damage it could do. Bobo viciously glared at
Doug, who lay broken on the rocks in front of him.

Within moments, the four tigers were keenly scaling the lift
arm and escaping their prison. Natural instincts took over. It
was time to hunt.

Before the zoo's emergency protocol had time to react, Bobo
plunged the chainsaw right into Doug's intestines. People
screamed in horror as his innards splattered all over the display
windows. Once the bottom half of Doug was sawed in two and
his lifeless body convulsed, Bobo turned his attention toward
the windows, where the children still screamed. He leapt forward,
and now using both hands, held the blade to the glass. Mere
moments passed before the chainsaw breached it. Bobo took
six steps back and then rammed the window with his shoulder.
The whole thing fell through. He jumped in and charged down
the halls, slamming patrons, like rag dolls, out of his way.

Dan's son, Billy, shrieked in pure horror as the tiger pounced
on the baby goat he was feeding. Goat blood splattered him
down as he watched the tiger rip the animal's throat clear out
of its neck. Another tiger jumped on a cute, baby lamb's back.
The bones cracking in its spine along with the blood-curdling
wail echoed.

Right at the gorilla exhibit exit, Bobo stopped. A woman
pushing a stroller was frozen in fear, facing him. A long
pause came between them as they stared at each other.
That's when her baby noisily started crying. Reacting,
Bobo yanked the child from the stroller and in one bite,
brutally chomped off its head and then flung the infant's
torso at its dumbstruck mother, knocking her twenty feet
back before she skidded to a stop on the sidewalk.

A third tiger joined the easy pet zoo pickings. A simple
caged animal wasn't enough though. The thrill of the chase
ran through its veins. Dan, with his wife and son under
his arm, raced for the zoo exit.

Heroically, one of the patrons stood up to Bobo. Something
had to be done. Calmly, in a soothing voice, he said, "Take it
easy, big guy. This is all just-" Bobo instantly grabbed him by
the legs, lifted him up over his head and slammed his body
on the pavement numerous times. His brain came flopping
out of his shattered skull on the last body slam.

The forth tiger spotted its prey...Bobo. Crouched low among
the artificial foliage, it crept upon the beast, watching as it
repeatedly pummeled the human against the pavement. Once
the ape threw the brainless mammal to the side like trash, it
turned its back and the tiger pounced. Fangs plunged into the
gorilla's neck and claws sank in his flesh.

Reaching the exit, Dan got his family through. "Get to the car,"
he yelled, handing Billy to his wife. The massive predator jumped
over the turnstyle as they ran.

Bobo reached around and grabbed the tiger by its head as he
smashed it against the rocks. When yanking it from his neck,
the tiger leapt. In mid-air, Bobo caught the four hundred pound
tiger's tail, yanked it backward and grabbed it behind the head.
When it turned to try to bite, the gorilla grabbed its lower jaw
and forced it down. Letting go of its neck, with the other hand,
Bobo grabbed the snout of the tiger and pulled upward. The Bengal
bellowed out in deafening pain as Bobo literally ripped its head
in half.

The tiger circled Dan rather than pursuing his wife and child.
"Let's get it," Dan yelled, trying to show no fear as the giant cat
kept pacing. He knew he was going to die, but at least his family
was safe. "Come on!"

Bobo crashed through the entrance gates just as the tiger
pounced for Dan. He felt the tiger's deadly breath on his
face just before the autumn air filled with gunfire.
Within seconds, the tiger and the giant gorilla were both
dead. Emergency zoo personnel mourned at what had to
be done, but there was no other way.

Months later, the zoo owner contacted Dan, offering
compensation. Even though years of therapy for his
son would surely be needed, Dan was ecstatic when
they offer him a free, one day, family pass to visit the
zoo again.


Welcome to the Zoo contest entry
Pays one point and 2 member cents.