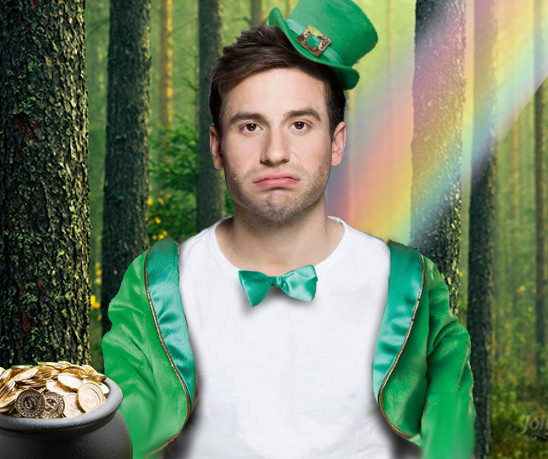 After the DNA test, I found that my blood line actually came from Ireland.
It took a long time but I did finally come across some ancestral relatives.
I couldn't find a phone number for any of them. That's when I decided to
go to the little town of Mardil, Ireland and see if I'd have any luck at finding
them.

Many of the local establishments knew of them and kindly pointed me
in the right direction. Fifteen miles from town, on an old dirt road, I came
upon the house in the woods.

When I knocked on the door, I was astounded at the size of the little man
that answered. He was tiny, like three and a half foot tiny. He asked, "What
is it you'd be wantin', lad?"

"My name is Edward Williams. I'm from the United States. Might there
be a Derrick Jen-"

"Dick, it's for you," he yelled and turned and wobbled away.

Then another small man came to the door. He said, "Word gets around
here fast, lad. So, rumor has it we have the same blood coursing through
our veins, eh?"

"As abundantly obvious, I have serious doubts about that as well."

We stood there just looking at each other for who knows how long before
he finally invited me in. I had to bend over getting through the whole house.
I sat on the floor rather than risk breaking one of their tiny chairs. There were
so many little people wandering the place I couldn't have counted them all.
The room we were in had a big-screen TV. They had the weather channel on.

"Hey, everyone, this giant is related to a few of us somehow. His name's Ed.
Give the lad a hello when passing," Dick announced. A few minutes later, he
offered to show me around. It was just as you'd think a little country cottage
would look like except for every room was ridiculously small. The oddest part,
though, was that every single room had a TV in it. And not only that, every
single television was on the weather channel. No sports, no movies, no
news...just weather.

Not only that, they had an intercom mounted to the wall in every room. Every
few minutes it would blurt out someone's name and that person would instantly
jump up and head to the back and go through a door into another room. "What's
going on back there?" I asked Dick.

That's when he decided my visit had reached an end. "I think you should go
back home, lad. We met, blah, blah, blah and now it's time for you to go."

"You can't be serious. I came all this way to find you and now you're just
going tell me to go back home? I want to know my ancestry before leaving."

"Are you sure about that, boy?"

He guided me to the mysterious door. "This is like that movie Matrix. You can
take the red pill and nothing changes, or take the blue pill and you see it all.
Going through this door is just like that. Once you go through this door, there's
no going back...ever. This is your only chance. Choose wisely."

The door opened to an enormous underground cavern that had endless piles
of gold coins stacked everywhere. There was a little guy monitoring three
giant screens. "Sun's coming out in Boston," he yelled.

Another little man scooped up a pot full of gold coins and shoved it in my
hands. "Ready," he hollered.

"I told you, no going back, laddie. Give the gold to whoever shows up."
Dick sarcastically saluted me goodbye.

The next thing I knew, I was standing in drenched woodlands, at the end of a
rainbow, with a ridiculously small green suit and tophat on.

I created this silly picture myself from a few different Google Images.