Using a public computer can be challenging 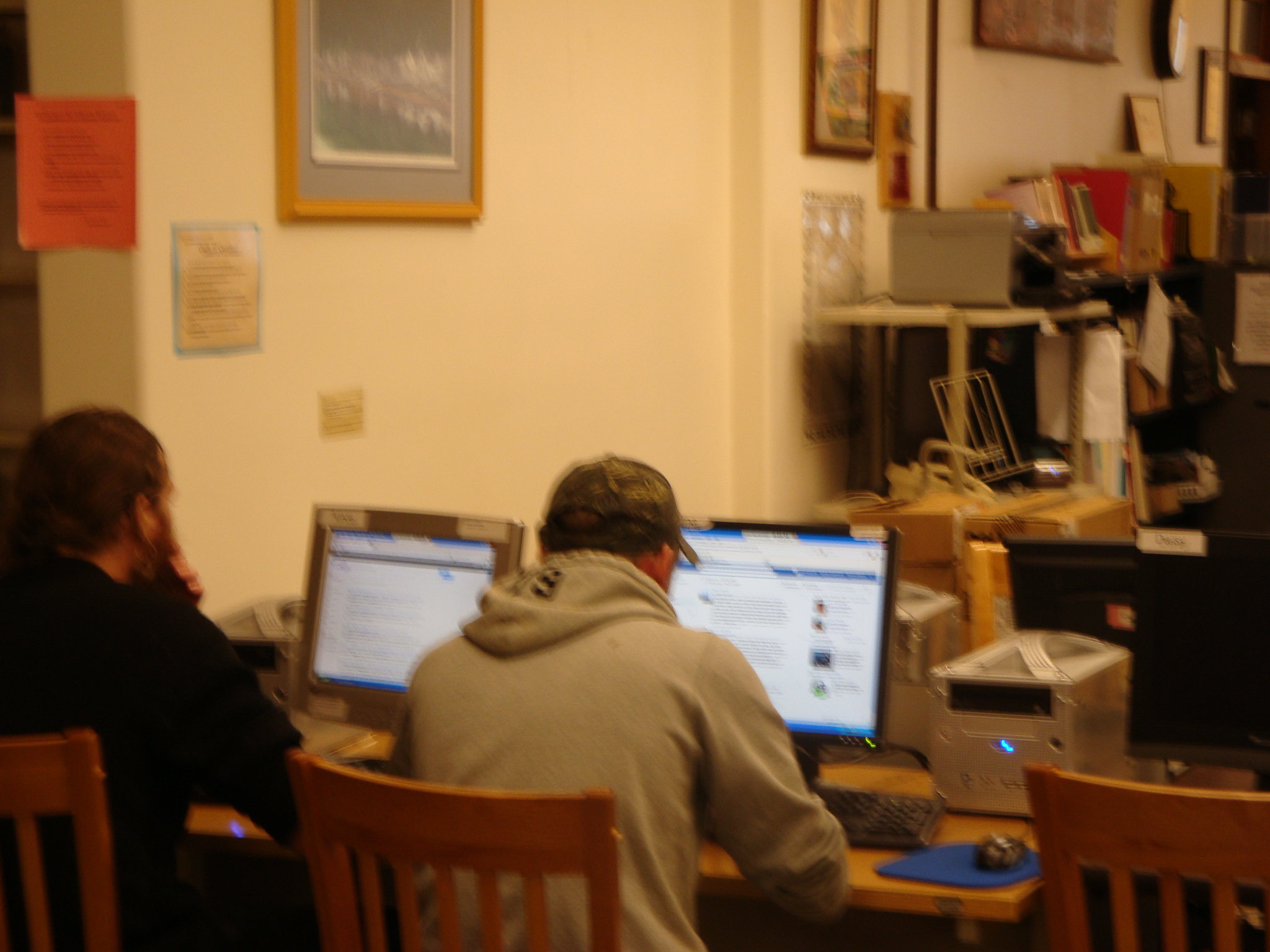 I'm going to provide a little backround for this story. Hopefully it will make sense then. When I was living in the native village of Hoonah some years back, the only library that I had access to was the Hoonah City Schools library, which also served as the public library. Of course like all modern libraries, there were computers available for the public to use, and used they were. Not only by the members of the city at large, but by the students as well. After school and on weekends, the kids flocked to them to play games or whatever kids do with computers.

I was fortunate enough to have my own computer at home, and I was posting blogs just about every week, complete with pictures. At one point though, my computer was down and I was forced to avail myself of the computers at the library. It was a less than satisfying experience. The following is a blog post as the result of that encounter.

Well, I'm up here at the library again. It's the only place available for me to continue with the blog posts. However, it's not ideal. For one thing I'm out of my comfort zone a bit. I never know what I'm going to confront when I come up here. On occasion, I come here and all eight computers are in use. Unfortunately, even though there is a thirty minute use policy in place, it's not enforced. As a result, some folks come here when the library opens at 1:00 PM and don't leave until they close, or so it seems. I really think the library chairs should have built in heating elements, much like an electric stove. After thirty minutes of one person's bum sitting on the seat, a sensor would turn on the element, and it would heat up until it became too uncomfortable for even the most callused person to remain seated.

For reasons that elude me, each computer has been assigned a name. Today when I came here, there was a computer open, but not the one I like. I happen to like Julian. Julian the computer is located at the end of the table, which means I'm not sandwiched between two other users in case the library is crowded. Most of the time Julian works pretty fast. Amos and Bertha, two of the other computers on this side of the table, seem to cause problems, so I don't like to use them. I don't know the name of the computer beside me. The name tag is missing- probably ripped off in a fit of rage by a patron who was totally frustrated with its performance. Understandable. Nothing brings out the beast in us like an unruly computer.

When I came up here today, Julian was in use by a lady who could use a little professional help in the mental health department. I was forced to sit at Amos, which proved to be totally unsatisfactory. It's just as well, since I had to go home and retrieve the hardware for my camera in order to download a picture for the blog post. When I came back, the gal was sitting at Amos and Julian was free. However, she left her jacket, I pod and two bags of groceries in the area. I hope she doesn't think I'm trying to make off with her stuff. That could be an unpleasant scenario. She, too, found Amos to be unsatisfactory, and has moved across the table to a computer that was being used by a fellow playing dominoes. Domino Man went downstairs to use the restroom and when he returned, his spot was occupied by Needy Lady. Fortunately Domino Man is pretty laid back and no scene ensued.

There are times when I come up here and it's complete and utter chaos. Especially after school lets out. The kids seem to think the computers are primarily for games and they play them emphatically. They talk back and forth without reservation and the noise makes it really hard to concentrate. I do wish the librarian would put in a grant request for the  cattle prod that I had suggested some months ago. There would be much more order. I would probably contribute to such a worthy cause myself. Oh well, wishful thinking. I guess I'd better go; my post is finished, and this seat is starting to get uncomfortably warm.

Having to utilize the public computers at a library can be a frustrating experience. When order isn't maintained, things can get out of hand rapidly, especially where kids are concerned. Unfortunately, back at the school library in Hoonah, discipline was lax or non-existent, so in short order the library after school hours could resemble a circus.
Pays one point and 2 member cents.