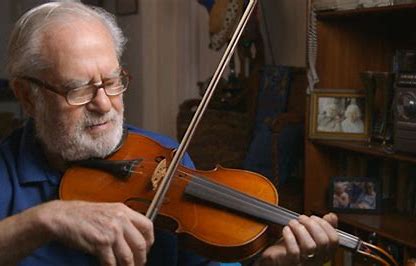 On her regular walks on the way to the butcher's shop she had been tempted to open the gate and go in, but she invariably had one or more of her younger siblings with her, so she had resisted the pull.

This foray was different. She had woken up just after 5am on a hot, summer morning and known immediately where she was going.
She dressed quickly, willing the other children to remain asleep.
She carried her sandals to the front gate and slipped them on before fleeing up the street to the house with the big brushwood fence and gates.

As she opened the gate an odd feeling of being "not alone" came to her, but she let it pass and went in, closing the gate behind her.Fish were darting about amid the plants in the pond.
From broken statuettes on the edge of the pond she picked up one of a man playing a violin.
A breeze shivered through the branches above as a voice spoke to her.

She froze for a moment, and then turned towards the speaker.
He was sitting on a bench next to the house, his eyes closed. Alongside him was a large, white, walking stick which, she knew, was the sign of a blind person.

"What did you say?" she said. He was an elderly man, dressed in a shirt and trousers with slippers on his feet. He held a violin. When he spoke she didn't understand his language but she smiled back. He lifted the violin and began to play.
The music wound around her like a magic spell, bewitching her and she realized this was no ordinary music. She recognized the piece as a Romance by Brahms from the record collection at home, but even to her 9year old ears, the music was played as it had never been played before.
She put her hands over her ears, but it still reached her, faint but clear.
She backed away towards the gate, the music surrounding her. She reached for the latch. The music faded.
She ran and never returned.