War can push us closer to God 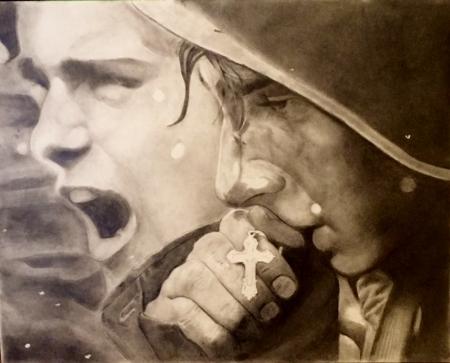 It was 1968 and the Vietnam War was still going on. I had grown up playing army with the kids in my neighborhood. We all had our plastic guns and some of us had helmets or canteens that had been passed down by our uncles or granddads. I read comic books like Our World at War, and Sgt. Rock and Easy Company. In comics, or the games we played, the bad guys always died. We'd get wounded but healed up in minutes, heroes in our own eyes. Now the nightly news was bringing the realities of war into our homes.

Reality was much different than our childhood games. Night after night scenes of young men, bloodied and bandaged, being loaded on helicopters came right into our living rooms. War correspondents, traveling with the troops reported on the fire fights while gunfire and explosions sounded in the background, and smoke rose in the distance, maybe from napalm dropped on the enemy, or perhaps from a downed helicopter transporting the wounded back to the base. Before the reporting would end, there was always a body count, telling how many of the enemy were killed, and how many of our guys died. If body counts determined the winner, then I guess we were winning. That's all that counted at the time.

I was still in high school, too young for the war, caught up in my girlfriend, my new driver's license, the weekend. War was far away, until it wasn't. I had spent the weekend camping and fishing with my friend Don. His brother Bill had been drafted and was in "Nam" and Don was very proud of him. We had just come home when his mom met us at the front door with a worried look on her face.
"Boys," she said, "I just got a call from the army hospital in Germany. Bill has been shot and they're working on him. They aren't sure if he'll recover. I need you boys to pray."

The words hit like a punch to the gut. Bill, the guy who used to tease us, the guy who sang in high school plays and sat on the front porch and told us jokes... Bill might die. I hadn't been to church in years, but that night I prayed for all I was worth, and God heard me.

During the Vietnam War, television anchors brought the country up to speed on the number of casualties on both sides of the conflict. The local newspaper used to publish the names of the young men who were killed in action. Almost daily a name or two or more would appear in the paper and the memory of someone who had attended the local high school would be refreshed. Whether they played in one of the sports teams or worked at the local gas station or grocery store, the fact that they would no longer be with us would finally hit home. Though the war was in a far away place, it still affected us all. When a person is in trouble, and never more so than when they are involved in a battle, prayer becomes a lifeline to God, and knowing that you aren't alone in your prayers can give you some strength and hope. Like the saying goes, there are no atheists in a fox hole.