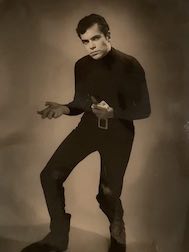 A Yank who has been living in Toronto, Ontario - Canada since 1969.

From ships to jazz

. . . Some say the words "feeling blue" comes from the tradition of ships flying blue flags and bearing a painted blue band when a captain or another officer died. Another origin of "the blues," is derived from mysticism involving blue indigo, which was used by many West African cultures in death and bereavement ceremonies where all the mourners' garments would have been dyed indigo blue to indicate suffering. This mystical association toward the indigo plant, translated to the US and the slaves who worked on cotton in the Southern plantations, often singing dirge-like songs referred to as "the blues."

The word "blue" was first used by Chaucer in about 1385, in his poem, Complaint of Mars. Washington Irving is credited with having first used the term "the blues" in 1807, as a synonym for sadness: 'He conducted his harangue with a sigh, and I saw he was still under the influence of a whole legion of the blues.' Irving was shortening the phrase "blue devils" which was a synonym dating back to Elizabethan time to describe a menacing presence. "The Blues" as a musical form, featuring flattened thirds and sevenths, may have originated around 1895, although officially in W.C. Handy' s Memphis Blues.. . .


© Copyright 2022. Lobber All rights reserved.
Lobber has granted FanStory.com, its affiliates and its syndicates non-exclusive rights to display this work.

Pays: 10 points. and 86 member cents
Copyright © 2000 - 2022 FanStory.com. All rights reserved. Terms under which this service is provided to you. Our privacy statement.
top
You Have No Rank
Share 4 posts to be ranked.