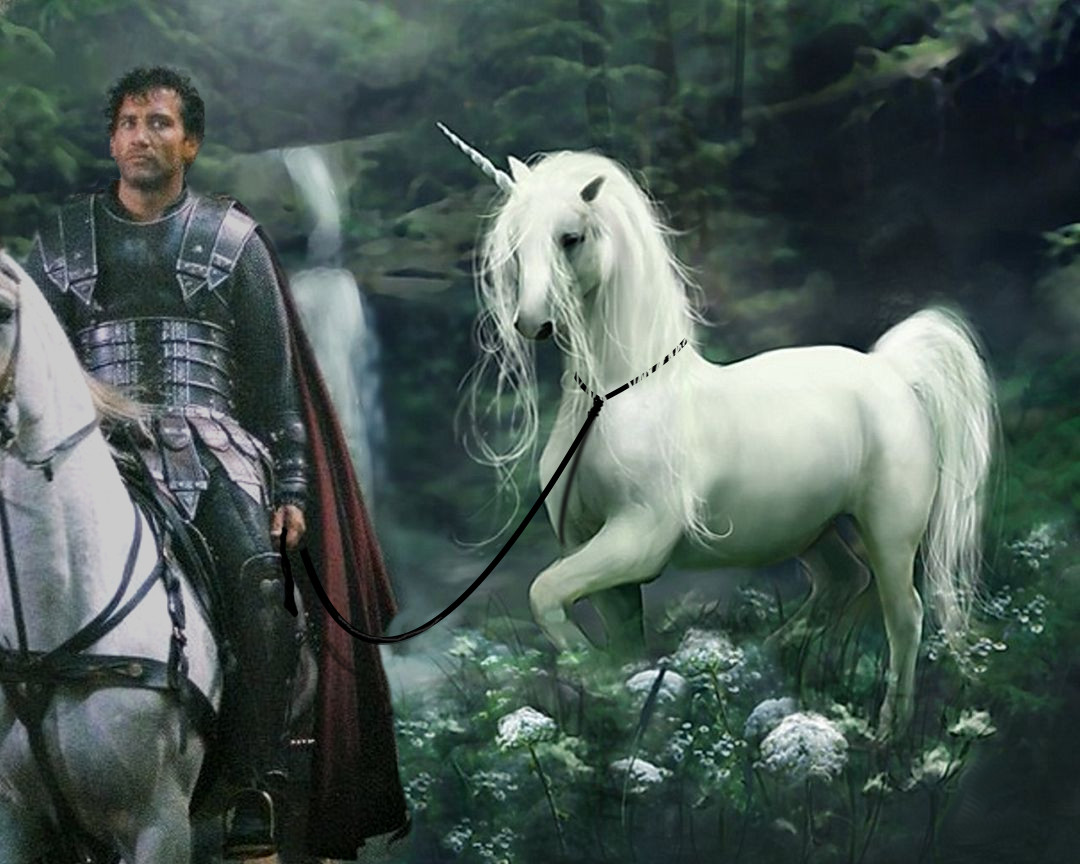 "I believe, Sire, through our informant, that they are keeping the last unicorn in one of the dungeons of King Lannister's palace."

King Bushmoore looked at his captain and said, "We must retrieve this treasure at any cost. Gather your armies and take the wizard with you. I want the unicorn in my possession within two weeks' time."

Captain Matir did just as commanded and left the next day with the wizard at his side and his armies behind him. They traveled four days until they reached the edge of King Lannister's kingdom. They made camp for the night. Captain Matir's plan was to attack at dawn. He sent two scouts ahead to reconnoiter the layout of the palace and to assess the best means of attack.

Just before sunrise, his men were armored and mentally primed for battle. Captain Matir stood before them and gave a riveting battle speech, telling them that the unicorn must be captured alive and that the wizard had to be protected with their lives. Then, at the raising of his sword, they charged.

King Lannister had his own army at the ready. He knew the attack was coming from the reconnaissance of his own scouts. The castle crenels were lined with rows of archers. On the inner catwalks he had vats of boiling oil, at equal intervals, surrounding the castle for when the enemy drew near.

Numerous men of Captain Matir's army fell as waves of arrows rained from the autumn morning sky. They reached the castle's perimeter with the wizard still unscathed. Twenty feet from the mighty, double doors of the castle, the wizard began chanting an unintelligible string of words. Within seconds a blue, glowing, magic orb surrounded him. He approached the doors as the boiling oil from above came pouring over the edge of the castle wall. The moment the oil splattered atop the orb it instantly turned it into a black ice, which froze all the way back up to the kettle it poured from. The wizard raised his arms and the giant doors exploded inward, covering the courtyard with debris. He stepped to the side as the captain's army charged in through the frozen archway.

Countless men died as Captain Matir ordered his second in command to seize the castle. He took four of his lieutenants to go find King Lannister. After killing the knights that guarded the king's chamber doors, they found him in the center of the room with his sword drawn. As the lieutenants circled the king, the captain spoke. "My intent is not to slay you, but rest assured, I shall...unless you tell me exactly where you have the unicorn hidden. Dare not mock my intelligence, I know you have it."

King Lannister just stood there silent. Captain Matir slowly drew his sword, put the blade up to his throat, leaned in and said, "I will not ask again."

The king closed his eyes and dropped his own saber and muttered, "It's in the west wing dungeon."

"Wise choice." He grabbed the king's shirt and pulled him within inches of his face. "Tell your men to yield or, by God, not a one will be left standing." He shoved the king toward the door. Once in the courtyard, he did precisely as told to spare any more bloodshed. The king led Captain Matir and his lieutenants to the west wing dungeon where they found the unicorn chained.

As the captain led the unicorn out of the castle he ordered his men to gather the fallen to bring home for burial.  The journey back took longer because of the wounded and dead but on the fifth day Captain Matir entered their kingdom with the unicorn behind him in tow.  The captain dismounted from his steed and made his way to the throne room where he knelt before King Bushmoore. "Sire, we have returned and our quest was victorious.  We brought you the last unicorn."

"A high price, indeed, but well worth the sacrifice.  Well done, captain. Tonight we shall celebrate."

That evening the royal family and honored guests mingled in the castle ballroom.  Captain Matir had the honor of parading the unicorn through the great hall into the gathering where everyone stood and gazed in awe at the magnificent creature.  King Bushmoore and his queen were beaming from the compliments and praise from their guests. Lifting his glass, the king gave a toast to Captain Matir and his brave men.  All were still cheering as the captain led the last unicorn out.

An hour later, amidst the singing and dancing, Captain Matir approached the king discreetly and inquired, "I beg your pardon, Sire, but the cook needs to know if you want your unicorn steak fried or grilled."

reconnoiter - make a military observation of.
crenels - an indentation in the battlements of a fort or castle, used for shooting or firing arrows through.

I created this picture from a couple different Google images.