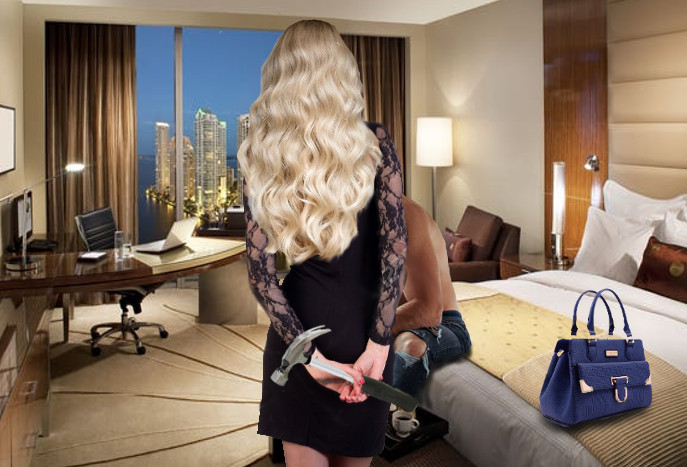 My name is Jack Sheldon and I've been working Homicide in Las Vegas for
the last eight years. Six of those have been spent on one particular serial killer
case. Our perp is a blonde female in her early thirties. Her motives, after all
these years, are still unclear. From our investigation and security footage we
know she's around five foot, three in height, weight somewhere in the vicinity of 140
pounds, elbow length blonde hair, wears designer clothes and always carries
a blue, Louis Vuitton, clutch purse with matching gloves. Within the contents
of her purse she carries the murder weapon. The coroner has determined that
it's most likely a twelve-inch, claw hammer that can be purchased at any
hardware store. She chooses her victims at random from casino bars. So far,
she has killed eleven men and five women, all of them brutally bludgeoned to
death in their hotel rooms. Last night's victim was one Samuel Curtis, attending
his company's annual golf tournament.

When I exited the elevator, I walked up to my partner that had just finished
questioning the maid that found his body. Lucy's only been my partner for two
years but does her job surprisingly well. She's had my back on more than one
occasion. I trust her with my life. I asked, "What do we got?"

While we entered the room, she answered, "Same M.O. His head looks like
uncooked meat loaf. I've seen the security footage and, again, not one camera
will be able to provide facial recognition. She knows her stuff. We have last
night's bartender with the sketch artist, but he says he really didn't get a good
look at her, so that'll be no help, I'm sure."

"How long did this one take."

"Looks like she's going for a record. She was in there for just under eight
minutes, killed the poor bastard, washed off the blood in the sink and left.
It's definitely her, she left her signature lipstick heart on the mirror."

"Let me guess, nothing stolen?"

"Correct. This psycho's clearly doing this for sport or kicks."

I told her to finish up and I'd meet her back at headquarters.

We worked on this for three more weeks and came up with our usual nothing. No
clues, no leads...nothing. As I was leaving for home on Friday, Lucy asked, "You
think we'll ever catch this psychotic lunatic?"

I just shrugged my shoulders and left.

Later that night, after I shaved and took a shower, I was staring at myself in the
mirror. I gave good thought to her question. Would we ever catch this murdering,
demented psychopath? I then put on and adjusted the blonde wig, slid the designer
gloves on my hands and dropped the hammer into my Louis Vuitton. I grabbed
the red lipstick and smiled at myself on the way out and said, "It's doubtful."

I titled it this because if I titled it "The Blonde Serial Killer" some folks might not even bother reading it. Lol.

I created this picture from 6 different Google Images.